All About Me! by Mel Brooks Book Summary

NEW YORK TIMES BESTSELLER • At 95, the legendary Mel Brooks continues to set the standard for comedy across television, film, and the stage. Now he shares his story for the first time in “a wonderful addition to a seminal career” (San Francisco Chronicle), “infused with nostalgia and his signature hilarity” (Parade).

NAMED ONE OF THE BEST BOOKS OF THE YEAR BY NEW YORK POST • “Laugh-out-loud hilarious and always fascinating, from the great Mel Brooks. What else do you expect from the man who knew Jesus and dated Joan of Arc?”—Billy Crystal

For anyone who loves American comedy, the long wait is over. Here are the never-before-told, behind-the-scenes anecdotes and remembrances from a master storyteller, filmmaker, and creator of all things funny.

All About Me! charts Mel Brooks’s meteoric rise from a Depression-era kid in Brooklyn to the recipient of the National Medal of Arts. Whether serving in the United States Army in World War II, or during his burgeoning career as a teenage comedian in the Catskills, Mel was always mining his experiences for material, always looking for the perfect joke. His iconic career began with Sid Caesar’s Your Show of Shows, where he was part of the greatest writers’ room in history, which included Carl Reiner, Neil Simon, and Larry Gelbart. After co-creating both the mega-hit 2000 Year Old Man comedy albums and the classic television series Get Smart, Brooks’s stellar film career took off. He would go on to write, direct, and star in The Producers, The Twelve Chairs, Blazing Saddles, Young Frankenstein, Silent Movie, High Anxiety, and Spaceballs, as well as produce groundbreaking and eclectic films, including The Elephant Man, The Fly, and My Favorite Year. Brooks then went on to conquer Broadway with his record-breaking, Tony-winning musical, The Producers.

All About Me! offers fans insight into the inspiration behind the ideas for his outstanding collection of boundary-breaking work, and offers details about the many close friendships and collaborations Brooks had, including those with Sid Caesar, Carl Reiner, Gene Wilder, Madeleine Kahn, Alfred Hitchcock, and the great love of his life, Anne Bancroft.

Filled with tales of struggle, achievement, and camaraderie (and dozens of photographs), readers will gain a more personal and deeper understanding of the incredible body of work behind one of the most accomplished and beloved entertainers in history.

All About Me! by Mel Brooks Book Reviews

waiting to use - Genius

This guy had made me laugh my whole life!!! Great book.

loopandwave - What a fun nostalgia trip

My first encounter with Mel Brooks was as four-year old in the Fifties throwing tantrums to be allowed to stay up and watch Your Show of Shows with my parents. I had no idea what was going on of course but my parents laughed so hard and were so happy I just wanted to be a part of it. With this book I got to relive all the happy Mel Brooks experiences that happened from then on and now I have a bunch of new ones from all the stuff I didn’t know before. Thanks Mel Brooks.

I can’t wait till my memory starts to go so I can read again for the first time.

I loved every single page of this book. His memories bring humor to mine.

A fun quick jaunt down memory lane inside the head of a very funny man.

Easy to read, funny biography of Mel’s interesting life. I gave it four instead of five because out of nowhere he says he got divorced and he never once mentioned meeting or marrying his first wife. Also, the last chapter isn’t as good as he just talks about receiving awards and politics. Overall, a funny book especially the time he met Bob Hope during WWII and then later in life become famous and get to know Bob Hope as a peer! You never know where life will take you!

Absolutely wonderful read… I could hear his voice in my head as I read… couldn’t put it down.

Mel Brooks - All About Me! Comments

Mel Brooks (born Melvin Kaminsky; June 28, 1926) is an American actor, comedian and filmmaker. With a career spanning over seven decades, he is known as a creator of broad farces and parodies widely considered to be among the best film comedies ever made. He began his career as a comic and a writer for Sid Caesar's variety show Your Show of Shows (1950–1954) alongside Woody Allen, Neil Simon and Larry Gelbart. With Carl Reiner, he created the comic character The 2000 Year Old Man. He wrote, with Buck Henry, the hit television comedy series Get Smart (1965–1970). In middle age, Brooks became one of the most successful film directors of the 1970s, with many of his films being among the top 10 moneymakers of the year they were released. His best-known films include The Producers (1967), The Twelve Chairs (1970), Blazing Saddles (1974), Young Frankenstein (1974), Silent Movie (1976), High Anxiety (1977), History of the World, Part I (1981), Spaceballs (1987), and Robin Hood: Men in Tight...

● If you want to link to All About Me! book page, please use the codes provided below!
L
C 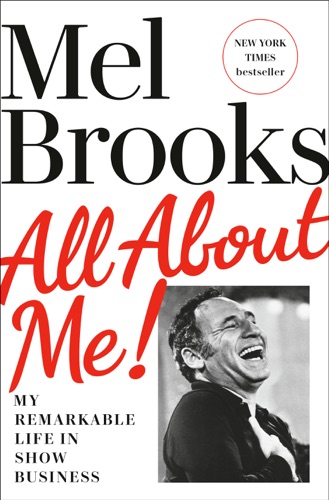