In Turkey ZIP codes are five-digit numbers formed as in Germany or in fact in France. During the implementation of the ZIP code system it has been followed the French example, who at that time already included the five digits. The CAP in Turkish is called posta kodu. The first two digits in the numerical series correspond to the province and are also found on the license plates. In addition, these two numbers coincide with the numbers of the international code ISO 3166-2: TR. The last three digits represent the locations. For cities can also describe a certain neighborhood. Turkey post codes vary in each administrative section. In Turkey order for the shipments to be delivered to the correct place on time, it is necessary to make sure that these codes are correct. This is an online tool to search postal code of a place, address or city in Turkey.

Turkey is a country found in Asia. It is located 39 latitude and 35 longitude and Here’s a map showing Turkey and nearby countries. 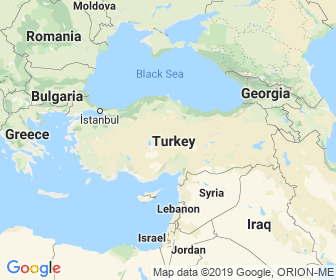