At the subnational level, Puerto Rico is divided into only 78 municipalities. The largest municipality is San Juan with an estimated population of 400,000 inhabitants. The postal service in Puerto Rico is managed by the Sectional Center Facility of the United States Postal Service, which is based in San Juan. Puerto Rico postal codes are composed - as in the United States, by nine-digit codes (ZIP + 4). The first three digits refer to the main zone or processing center respectively delivery center. Puerto Rico post codes vary in each administrative section. In Puerto Rico order for the shipments to be delivered to the correct place on time, it is necessary to make sure that these codes are correct. This is an online tool to search postal code of a place, address or city in Puerto Rico.

Puerto Rico is a country found in Americas. It is located 18.25 latitude and -66.5 longitude and Here’s a map showing Puerto Rico and nearby countries.

Puerto Rico (Spanish for 'rich port'; abbreviated PR; Taino: Boriken, Borinquen), officially the Commonwealth of Puerto Rico (Spanish: Estado Libre Asociado de Puerto Rico, lit. 'Free Associated State of Puerto Rico'), is a Caribbean island and unincorporated territory of the United States. It is located in the northeast Caribbean Sea, approximately 1,000 miles (1,600 km) southeast of Miami, Florida. The Commonwealth is an archipelago among the Greater Antilles located between the Dominican Republic and the U.S. Virgin Islands; it includes the eponymous main island and several smaller islands, such as Mona, Culebra, and Vieques. It has roughly 3.2 million residents, and its capital and most .. 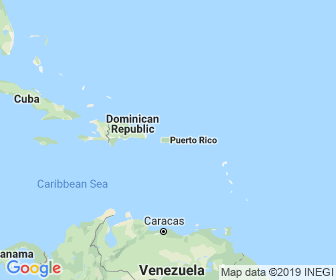