Colombia post codes vary in each administrative section. In Colombia order for the shipments to be delivered to the correct place on time, it is necessary to make sure that these codes are correct. This is an online tool to search postal code of a place, address or city in Colombia.

Colombia is a country found in Americas. It is located 4 latitude and -72 longitude and Here’s a map showing Colombia and nearby countries.

Colombia ( (listen), ; Spanish: [koˈlombja] (listen)), officially the Republic of Colombia, is a country in South America with an insular region in North America. It is bordered by the Caribbean Sea to the north, Venezuela to the east, Brazil to the southeast, Ecuador and Peru to the south, the Pacific Ocean to the west and Panama to the northwest. Colombia comprises 32 departments and the Capital District of Bogotá, the country's largest city. It covers an area of 1,141,748 square kilometers (440,831 sq mi), with a population of 50 million. Colombia's cultural heritage reflects influences by various Amerindian civilizations, European settlement, enslaved Africans, as well as immigration fro.. 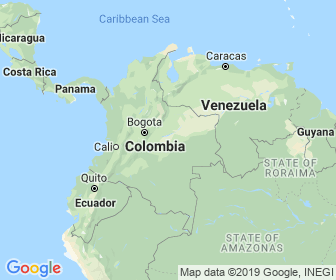