A Scandalous Passion: In the aftermath of her father's scandalous death, Lady Caelie Laytham has become a pariah, her hopes of making a suitable match beyond repair. With no prospects, she reluctantly sets out for Italy by ship in hopes of a better life. Lady Caelie has no better luck with the rough seas than she did with society and before she knows it, she is on her way back to London in the company of the disreputable Earl of Huntsleigh.

Spencer Kingsley, Earl of Huntsleigh, believes he has outrun his grandfather's demands that he marry by sailing as far from London as possible. Spence has witnessed firsthand the damage wrought by marriage, and the closest he is willing to get to the institution is his regular trysts with the ton's wives and widows. So when he finds himself put ashore with the lovely Lady Caelie and with no proper chaperone, he is certain the desperate innocent will do anything to save her own reputation -- including putting an end to his bachelor days.

But as scandal looms and an old lover's revenge threatens to ruin them both, passion ignites. Can they work together to achieve what each believed they have always wanted? Or will fate intervene and give them what they truly...

● If you want to link to A Scandalous Passion book page, please use the codes provided below!
L
C 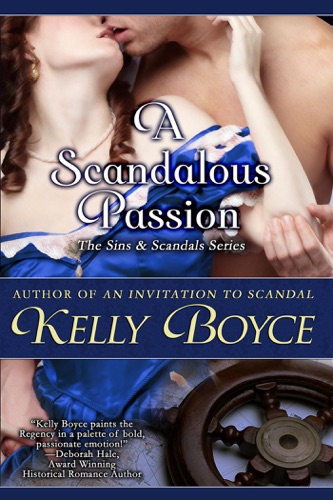