Rain on the Dead by Jack Higgins Book Summary

The past comes back to haunt black ops specialist Sean Dillon and his colleagues in this New York Times bestselling novel of terrorism, revenge, and a very old nemesis...

On a dark summer night, two Chechen mercenaries emerge from the waters off Nantucket to kill a high-value target, the former President of the United States. Unfortunately for them, the president has guests that night, including Sean Dillon and his colleague, Afghan war hero Captain Sara Gideon.

The Chechens do not survive the night, but Dillon is curious about how they even got on the island. What he discovers sends a chill through his bones—a name from Dillon’s distant past. If this man is working with the terrorists now, the assassination attempt is only the beginning—and next time, the results may be much, much different.

Rain on the Dead by Jack Higgins Book Reviews

Actor Jim - The King of Writers

I can read Jack Higgin books and over and over. The characters are great. I just wonder how long some them are going to be with us.

RedDog1 - What Ever Happened to Jack Higgins?

Possibly the worst political "thriller" I've ever read--AND, the worst by Jack Higgins ever. Just going though the writing motions...and the motions of cashing a check. I'm done.

Another great book by Jack Higgins!

Very disappointed with this latest Higgins story. The plot is just way too far fetched. Facts are just totally inaccurate. Like throwing stones into the Thames from Hyde Park. Errors such as Piece instead of Peace, and way too much going on in the story line. Probably the last Higgins' I will read. Pity really, the early ones were quite good.

Super boring. Found myself skipping large amounts of the book. Lots of characters getting killed and no real plot advancement. It was like... "Who cares?"

Juaquinto - Rain on the Dead

What if...this book was not written by Harry Patterson (Jack Higgins)? This is the second book in the Dillon series in the last fews years that smacks of ghost writing. What if...Mr. Patterson is auditioning another writer to carry on the series? He is 85. Maybe thinking about retirement? If so, we can only hope that this guy is not the one. BTW, came to this theory by page 88... Ferguson does not talk like this. Dillon drives the Mini - not the bad guys. I could go on.

Busybeekdb - Rain on the Dead

Great as usual, couldn't wait to know the ending so i read it in two nights!! Jack Higgins is the master! And not aq! loved it!

Caytyon - Rain on the Dead

This was not one of Jack Higgins best works and certainly not his worst. The usual cast of characters was present and played their parts well. The plot was perhaps not as intriguing as other plots Mr. Higgins has had . He does have an excellent way of tying in past stories into the current plot. None the less I enjoyed reading the novel and look forward to reading more from this great author

Henry "Harry" Patterson (27 July 1929 – 9 April 2022), commonly known by his pen name Jack Higgins, was a British author. He was a best-selling author of popular thrillers and espionage novels. His novel The Eagle Has Landed (1975) sold more than 50 million copies and was adapted into a successful 1976 movie of the same title.Some of his other notable books are A Prayer for the Dying (1973), The Eagle Has Flown (1991), Thunder Point (1993), Angel of Death (1995), Flight of Eagles (1998), and Day of Reckoning (2000). His 85 novels in total have sold more than 250 million copies and have been translated into 55 languages. Early life Jack Higgins was born Henry Patterson on 27 July 1929 in Newcastle upon Tyne to an English father and a Northern Irish mother. When his father abandoned them soon afterward, his mother returned with him to her home town of Belfast, Northern Ireland, to live with her mother and her grandfather on the Shankill Road. Raised amid the religious and political...

● If you want to link to Rain on the Dead book page, please use the codes provided below!
L
C 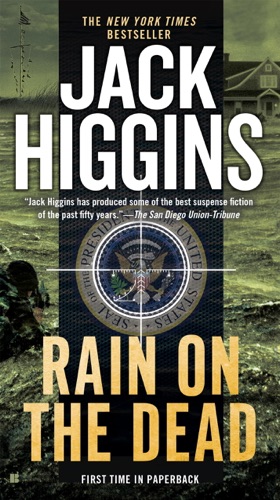