Loving a Lost Lord In the first of a dazzling series, Mary Jo Putney introduces the Lost Lords—maverick childhood friends with a flair for defying convention. Each is about to discover the woman who is his perfect match—but perfection doesn't come easily, even for the noble Duke of Ashton. . . Battered by the sea, Adam remembers nothing of his past, his ducal rank, nor of the shipwreck that almost claimed his life. However, he's delighted to hear that the golden-haired vision tending his wounds is his wife. Mariah's name and face may not be familiar, but her touch, her warmth, feel deliciously right. . . When Mariah Clarke prayed for a way to deter a bullying suitor, she didn't imagine she'd find the answer washed ashore on a desolate beach. Convincing Adam that he is her husband is surprisingly easy. Resisting the temptation to act his wife, in every way, will prove anything but. And now a passion begun in fantasy has become dangerously real—and completely irresistible. . . Never Less Than A Lady New York Times bestselling author Mary Jo Putney continues her stunning Lost Lords series with this stirring, sensual story of a rebellious nobleman drawn to a lovely widow with a shocking past. As the sole remaining heir to the Earl of Daventry, Alexander Randall knows his duty: find a wife and sire a son of his own. The perfect bride for a man in his position would be a biddable young girl of good breeding. But the woman who haunts his imagination is Julia Bancroft—a village midwife with a dark secret that thrusts her into Randall's protection. Nowhere Near Respectable Mary Jo Putney's riveting Lost Lords series unleashes a high stakes royal plot—which may prove easier for Damian Mackenzie to handle than his own unruly desire. . . He's a bastard and a gambler and society's favorite reprobate. But to Lady Kiri Lawford he's a hero—braver than the smugglers he rescues her from, more honorable than any lord she's ever met, and far more attractive than any man has a right to be. How can she not fall in love. . .? No Longer a Gentleman Grey Sommers, Lord Wyndham, never met a predicament he couldn't charm his way out of. Then a tryst with a government official's wife during a bit of casual espionage in France condemns him to a decade in a dungeon, leaving him a shadow of his former self. Yet his greatest challenge may be the enigmatic spy sent to free his body--the only woman who might heal his soul. Cassie Fox lost everything in the chaos of revolution, leaving only a determination to help destroy Napoleon's empire through her perilous calling. Rescuing Grey is merely one more mission. She hadn't counted on a man with the stark beauty of a ravaged angel, whose desperate courage and vulnerability thaw her frozen heart. But a spy and a lord are divided by an impassable gulf even if they manage to survive one last, terrifying mission. . .. Sometimes A Rogue. . . Even the most proper young lady yearns for adventure. But when the very well bred Miss Sarah Clarke-Townsend impulsively takes the place of her pregnant twin, it puts her own life at risk. If the kidnappers after her sister discover they've abducted Sarah instead, she will surely pay with her life. . . Rob Carmichael survived his disastrous family by turning his back on his heritage and becoming a formidable Bow Street Runner with a talent for rescuing damsels in distress. But Sarah is one damsel who is equal to whatever comes. Whether racing across Ireland with her roguish rescuer or throwing herself into his arms, she challenges Rob at every turn.

Mary Jo Putney (born in New York) is a best-selling American author of over twenty-five historical and contemporary romance novels. She has also published romantic fantasy novels as M.J. Putney. Her books are known for their unusual subject matter, including alcoholism, death, and domestic abuse. Biography Putney was born and raised in New York. She attended Syracuse University, earning degrees in English literature and Industrial design. She served as the art editor of The New Internationalist magazine in London and worked as a designer in California before settling in Baltimore, Maryland in 1980 to run her own freelance graphic design business.After purchasing her first computer for her business, Putney realized that it would make writing very easy. She began work on her first novel, a traditional Regency romance, which sold in one week. Signet liked the novel so much that it offered Putney a three-book contract immediately. In 1987 that first novel, The Diabolical Baron, wa....

● If you want to link to Mary Jo Putney's Lost Lords Bundle: Loving a Lost Lord, Never Less Than A Lady, Nowhere Near Respectable, No Longer a Gentleman & Sometimes A Rogue book page, please use the codes provided below!
L
C 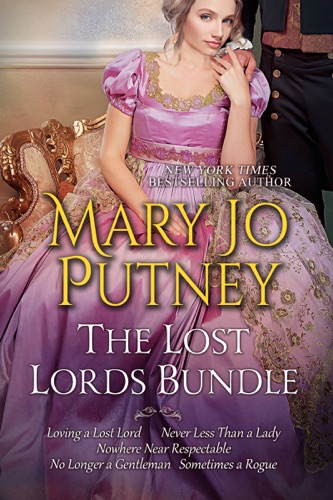