The #1 New York Times-bestselling author and master of the modern day thriller returns with his All-Star team.

There’s a new strong man in Russia but his rise to power is based on a dark secret hidden decades in the past. The solution to that mystery lies with a most unexpected source, President Jack Ryan.

First off, I highly doubt Clancy put any major input into this one. The book contains some rather boring and drawn out sequences but it's balanced by great action. It was nice to see the return of the classic alliances, organizations and characters. All in all, this book was decent. If you have a few dollars to spare: Get it.

hard to put down when you start this great story. Clancy delivers again.

I have read three of the latest Clancy books co-authored by Mark Greaney. I liked the other two, Full Force and Threat Vector much better than this one. The failure of Command Authority is that a lot of the Book seemed like a history text. Not enough action. And I think it had a very complex, forced plot. I had to force myself to read large portions of this book. That is not my idea of a great and enjoyable novel. Read the other two. They are great.

As usual a great read and very apropos to the day’s headlines. I highly recommend this for the action, the insight and the continuing saga of J.R., Junior along with the continued saga of J.R., Senior

Have read them all but this one is right up there. Not the best but certainly worth the read. Very different approach weaving the past into the present with Dad and son interacting.

Another excellent Clancy book. Not as engrossing as earlier works but, still quite good. The bouncing back forth 30 years takes away some suspense, action and story line . Worth the read.

Slow, unnecessary flashbacks and a sense of two very good writers not being able to pull together...made for a long read! Greaney can write a strong action packed book; and Clancy was very good at one time. But, perhaps conditions existed that did not permit these two writers from morphing into a single entity that took control. The introduction of the long flash-backs was very disruptive to the story and added little, other than, filler for this book . If this had been my first book by these writers, I believe I would have concluded this would be the last I would read.

This was Tom Clancy's last book. How fascinating that he wrote of Russia taking over Crimea without going into the rest of the Ukraine a year before it happened? Just like in the 90's when he wrote of someone using an airliner as a bomb to destroy the capitol building several years before 9/11. The world lost a great fiction writer last year someone insightful enough to sometimes connect the dots to the future.

Awesome book. Given the current state of World affairs today, this book is eerie in the way it seems to have predicted current events. It is an easy, gripping read that you don't want to put down. I enjoyed it very much!

Very disjointed. Multiple 30 year flashbacks distracting. No continuity. Weak plot. Far, far from the standards of "Hunt for Red October" or "Clear and Present Danger". Don't waste your time with this loser.

Incredible likeness to current crisis in the Ukraine. It is as if the authors wrote the book today in real time . Only, negative is the characters are many and not necessary.

CaseEsq - How Does He Do It?

For years I've read Tom Clancy's books and there have been so many times over those years that what I am reading between the covers of the fictional book is simultaneously playing itself out in the real world. Whether it's the Medellin Cartel or the turmoil in Ukraine, Tom Clancy has been dialed in like few else. This book does not disappoint and is eerily in line with our world today. I just hope that the John Clark's and Jack Ryan's of the world are out there putting it all on the line and come out on top as well.

Enjoyed the book but of the last three Clancy wrote this one was the least entertaining. At one point towards the end I actually forgot how I got to where I was..it was that drawn out. Overall, it was a good book.. I didn't read it in three days like I do Child or Flynn(r.i.p.) but it was good nonetheless.

We lost 2 great authors recently, Tom and Vince Flynn . Both made me love reading and expanding my horizons . Thank you to both for countless hours of entertainment ..this world is a darker place without you

Girry - Loved It/ Clancy did it again

Tom Clancy was ahead of the curve with every real-word scenario. His characters, relationships, and military knowledge allowed you to be immersed into his world. I will miss him. This book is no different in his style of writing. The content is extraordinary and had me running back to it time and time again.

Another captivating, intrigue filled episode from Clancy. Even though he is with us no longer, I hope his team continues to put out more of "Ryan" series.

I found this to be a decent story but filled with unnecessary technicality. Perhaps it was written as a screenplay. The characters were not very well developed. It did not hold my attention for long at a time.

Being a Clancy fan for a long time, this one is a good one to end on, could not put it down.

If only this story can continue.. this book was so good, I think I'll have to reread more Clancy books very soon. God speed my friend.

Except for some of the early battle scenes this book was totally predictable, needlessly wordy and boring. You could easily skip thru dozens of pages of useless detail without missing a thing. I knew this would happen from earlier books, but I thought maybe this one would be simpler...better. It wasnt

I have read all of Clancy's fictional novels and this one did not disappoint me. Like the others it is a spine tingling tale that is so believable and exciting. He always paid so much attention to technological details. I am so very sad that this will be the last of Jack Ryan and crew. Clancy was a true genius. My only negative comment is that I really hate the bad language and especially using God's name in vain.

After so many wonderful reads, it is with such sad regret this grat book is Tom Clancys last. We will miss him greatly!

Thanks Mr Clancy. It's been fun.

Wow! This story has it all, Jack Jr., President Ryan, The campus, Clark, ding, CIA, FBI, mi5, mi6, and of course Russia and the KGB. Man what an awesome story! Tom Clancy was a great story teller.

Superb read at every angle! In true Tom Clancy form, the pages flowed as his characters intertwined from past to present. RIP!

Good, but could have been better. Obvious which parts Clancy wrote and which parts were added after his passing. Can't believe this is our last real Tom Clancy book! He will be missed.

Truly a masterpiece! Mr. Clancy saved one of his very best for last. A must read.

As every fan of Tom Clancy knows this book was released just after his death. It was the planned release date and his passing was unexpected. I've always hated reaching the end of a Clancy novel since Search for Red October. I hated to see the enthralling story end each time. However, there was always the comfort of anticipating the next tale. Today that comfort, that anticipation, is lost. There will be no more Clancy stories of the Ryans, Clarks, international intrigues and the page turning plot lines that only this master could produce. Others may try to pick up the baton in his name but it is unlikely that they will have the master's touch. Wherever you are now, Tom, I know you are weaving stories that will capture the imagination of you fellows (and gals). You will be sorely missed, but missed with gratitude for all the entertainment you have given your fans over the decades. Yours has been a pinnacle of quality that will stand the test of time. Well done, sir.

I have read all of Tom Clancy's books and Command Authority is just as good as the first. we have lost a great storyteller too soon. RIP Mr. Clancy.

I can't believe I just read the last words of the last Clancy novel ever. The book was excellent just like all he had written. We will miss you Tom.

Thomas Leo Clancy Jr. (April 12, 1947 – October 1, 2013) was an insurance agent turned American novelist best known for his technically detailed espionage and military-science storylines set during and after the Cold War. Seventeen of his novels were bestsellers, and more than 100 million copies of his books were sold. His name was also used on movie scripts written by ghostwriters, nonfiction books on military subjects occasionally with co-authors, and video games. He was a part-owner of his hometown Major League Baseball team, the Baltimore Orioles of the American League and vice-chairman of their community activities and public affairs committees. Clancy was an ordinary American citizen w..
● If you want to link to Command Authority book page, please use the codes provided below!
L
C 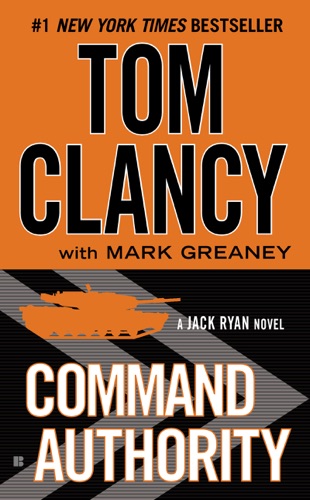