Lieutenant Eve Dallas must immerse herself in her billionaire husband Roarke’s world of big business to uncover the identity of a hit man in this thriller in the #1 New York Times bestselling In Death series.

On Manhattan’s East Side a woman lies dead at the bottom of the stairs, stripped of all her valuables. Most cops might call it a mugging gone wrong, but Lieutenant Eve Dallas knows better.

A well-off accountant and a beloved wife and mother, Marta Dickenson doesn’t seem the type to be on anyone’s hit list. But when Eve and her partner, Peabody, find blood inside the building, the lieutenant knows Marta’s murder was the work of a killer who’s trained, but not professional or smart enough to remove all the evidence.

But when someone steals the files out of Marta’s office and the killer’s violent streak begins to escalate, Eve knows she has to draw him out, even if it means using herself as bait…

Was not as good as her other books. It takes a Party to get to a cop. Rourke and Eve are their typical loving, hard working married cop couple.

All aspects of a great book rolled into another slice of the “In Death” series. I always look forward to the next book and who I might meet in new characters.

I enjoyed reading this book as I have all the books written by “J D Robb.” I always figure out who the murderer is but the suspense hold because I didn’t n’t know how she’s going to catch the murderer. I don’t know for sure if the murderer will die because I can’t remember if the murder did in the other books by her that I’ve read. I just know she, find him/her and get hiM/her.

Hooked on golf - Calculated in Death

Interesting tale and a good read as usual. Not as much intrigue as some others in the series. But I love reading them and never find dull reading In these books. Only thing missing was not enough of Eve's interaction with Summerset. I love that character. He brings humor to mystery.

I discovered the JD Robb series so long ago I can't remember. I eagerly await every new story. This series combines my love of science fiction with murder and mystery and it doesn't hurt that there is also a little sex and romance thrown in. My perfect escape novels!

Who wrote this book? Certainly not JD Robb aka Nora Roberts. The dialogue, particularly in the scenes involving Dallas and Roarke, is trite. In fact, much of Eve's language borders on obscene; totally out of character. The relationships between the characters is almost non-existent. The "murder" mystery is boring. I've read every one of the previous "Death" novels. I download them automatically because they are consistently a really good read. I won't do that again; I'll get a sample and if the next is as lousy as this one, I won't be buying any more. If Nora needs help from a ghost writer, she needs to hire one who's read the other books, not to mention someone who has some writing skills, not someone who usually writes dime-store detective pulp fiction. This book is so boring it may be the first Robb/ Roberts book I don't bother finishing. Very disappointing!!

I have read every JD Robb death series books, they are amazingly fantastic! I am a fan forever. Dallas, Roark, Peabody and the entire family are enticing. Ready for the next book!

Keshla - Not one of the more compelling novels in the series

I've been a long-time fan of the "...In Death" series overall, but some are more successful and compelling than others. I had a hard time getting into this one and actually stopped after a few chapters. I picked it back up a few months later and finished it. Accountants? Meh. I suppose even Nora can't fire on all cylinders every time! Still a huge fan and keep waiting for another great series in which to get swept up!

I found this book terribly disappointing . In fact I have read 80% of it and I just decided to put it down. The writing style was weak and I kept feeling as if it was a high school paper that needed to be a particular number of pages. What bothered me most was the repetitive use of slang. If I had one dollar for every time the word "vid" was used , I could buy several books worth reading. Ed Rommel

The plot points reads like it's J. D. Robb. But the writing style feels like an alternate personality - and not for the better. The major story arc continues onwards as we see our favorite characters progress. But the dialogue seems to come from another dimension.

I've always been a fan of J.D. Robb but lately the latest books have become very dull, repetitive and predictable. I get the feeling they were written in a hurry instead of inspired by something. I hope the author steps it up for the next book.

The other Eve Dallas books I couldn't stop reading, but this one was one you could put down. It is just okay.

i love all things in death and was not disappointed in the least with this one. just wishing for more mavis - she has been getting, it seems to me, less and less air time. i love mavis - want more mavis

This book was not as good as past Eve Dallas books. Perhaps J. D. Robb is running out of ideas for the books.

Great book! I like all of the In Death series. This is my favorite of all of the book series I've read! I highly recommend it!

I am reading this book right now! It is really well written and as with all of Robert's books, a page turner. I definitely will buy her books again!

Another intriguing mystery, just as expected.

One would think that after more than 30 books in the series the story of Eve Dallas and Roarke would get stale or begin to lose it's appeal. Not so! Every installment of the series has me unable to put it down and hungry for more when I come to the end! While I missed Mavis, Dr. Mira, and McNabb (all were in the book, just in a very limited capacity) I was just as captivated by Calculated in Death as I was by Naked in Death (book 1).

Another wonderful read that is hard to put down. The prolific writings of J. D . Robb are intriguing and always entertaining.

Once again JD Robb has proven her talent in taking you into Eve Dallas mind and life... Another wonderful thrilling story...

Enjoyed the book, which is easy to do as its a great visit with all the recurring characters. In this book, the killer for hire was such an odd character that the ending didn't have it's usual satisfaction for me. I did love the hacker though.

I usually love J.D. Robb books but this one was mediocre at best... This plot has been done in another of her books and feels almost like no thought or effort was put into the writing of it. Hopefully the next one will be better..

Wish I could review but cannot open what is going on? Also being forced to rate

By boysmumas Excellent read. As are all the books in the In Death series. Great to see all the familiar characters together again. Looking forward to the next of this series. I wanted Roarke to give Peabody a magic coat, also. Maybe for Christmas.

Cannot read the book as so many chapters are missing!!'. I should be refunded as the book is incomplete and disjointed, what's with Apple?

I enjoyed this very much. I've read every one of the Death series, and loved every one! They are a great read. Try to read them in order to get the full story of Eve, Roarke, Peabody, McNabb, et al! They are definitely worth it! Hope there are more to come!!!

PLEASE. Fix Another book not able to load froze on paused 3 books paid for and unable to read!

Nora Roberts (born Eleanor Marie Robertson on October 10, 1950) is an American author of more than 225 romance novels. She writes as J. D. Robb for the in Death series and has also written under the pseudonyms Jill March and for publications in the U.K. as Sarah Hardesty. Roberts was the first author to be inducted into the Romance Writers of America Hall of Fame. As of 2011, her novels had spent a combined 861 weeks on The New York Times Best Seller list, including 176 weeks in the number-one spot. Life and career Personal life Early years Roberts was born on October 10, 1950, in Silver Spring, Maryland, the youngest of five children. Both of her parents have Irish ancestors, and she has described herself as "an Irishwoman through and through". Her family were avid readers, so books were always important in her life. Although she had always made up stories in her head, Roberts did not write as a child, other than essays for school. She does claim to have "told lies. Really good o...

● If you want to link to Calculated in Death book page, please use the codes provided below!
L
C 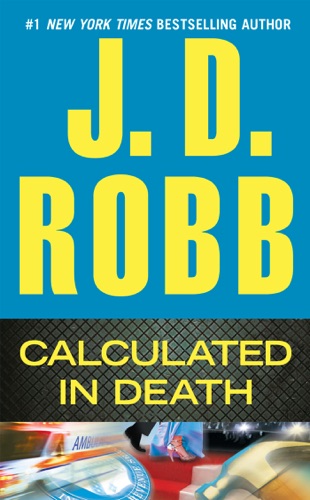