A Farewell to Arms by Ernest Hemingway Book Summary

The definitive edition of the classic novel of love during wartime, featuring all of the alternate endings: “Fascinating…serves as an artifact of a bygone craft, with handwritten notes and long passages crossed out, giving readers a sense of an author’s process” (The New York Times).

Written when Ernest Hemingway was thirty years old and lauded as the best American novel to emerge from World War I, A Farewell to Arms is the unforgettable story of an American ambulance driver on the Italian front and his passion for a beautiful English nurse. Set against the looming horrors of the battlefield—weary, demoralized men marching in the rain during the German attack on Caporetto; the profound struggle between loyalty and desertion—this gripping, semiautobiographical work captures the harsh realities of war and the pain of lovers caught in its inexorable sweep.

Ernest Hemingway famously said that he rewrote the ending to A Farewell to Arms thirty-nine times to get the words right. This edition collects all of the alternative endings together for the first time, along with early drafts of other essential passages, offering new insight into Hemingway’s craft and creative process and the evolution of one of the greatest novels of the twentieth century. Featuring Hemingway’s own 1948 introduction to an illustrated reissue of the novel, a personal foreword by the author’s son Patrick Hemingway, and a new introduction by the author’s grandson Seán Hemingway, this edition of A Farewell to Arms is truly a celebration.

A Farewell to Arms by Ernest Hemingway Book Reviews

Kassandra Yeoumans - “I don't want to be your friend, baby. I am your friend.”

A Farewell to Arms is just one of the many life changing stories Hemingway wrote in his life- but to me it's also the most meaningful. I've read every Hemingway book I know to exist and they all now hold a special place in my life, and in my evolution as a person. Hemingway's writing never fails to make you feel as though you have a connection with the people in the book- as if they're not just characters but friends you've known your whole life. A Farewell to Arms did not fail on that front (or on any front, in my opinion). It's a classic tale written by a classic writer and is a always worth a read AND a re-read.

The style of writing is certainly unique, but that's about the only positive thing I can say about it. As for what disappointed me...I won't spoil anything, but the ending left me unimpressed. It seemed as though Hemingway decided to flip off the reader in the last ten or fifteen pages. I can also see how the text could bore certain people, though it did get better as I got used to his style of writing. All in all: don't read this if you're easily bored by bland writing or if you're easily depressed. That said, I will be rereading this book someday to make sure that I'm not misjudging it, but for now I'm pretty turned off by Hemingway...

Ernest Miller Hemingway (July 21, 1899 – July 2, 1961) was an American novelist, short-story writer, journalist, and sportsman. His economical and understated style—which he termed the iceberg theory—had a strong influence on 20th-century fiction, while his adventurous lifestyle and his public image brought him admiration from later generations. Hemingway produced most of his work between the mid-1920s and the mid-1950s, and he was awarded the Nobel Prize in Literature in 1954. He published seven novels, six short-story collections, and two nonfiction works. Three of his novels, four short-story collections, and three nonfiction works were published posthumously. Many of his works are con...

● If you want to link to A Farewell to Arms book page, please use the codes provided below!
L
C 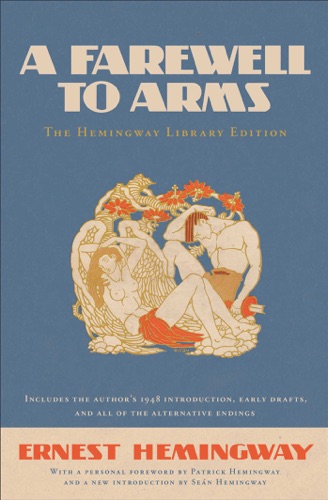