A fabulous contemporary thriller from the master of the genre – the author of the international bestsellers Midnight Runner, A Fine Night for Dying and Bad Company.

Sean Dillon is back in another heart-stopping, adrenalin-laced adventure

When the president's right hand men foil a plan to assassinate him. Sean Dillon is called upon to trace the would-be killer's history

It appears the assassin is British with Muslim connections, and suddenly Dillon is on a trail that leads him to England, Russia and Iraq, where he prepares for the deadliest challenge of his life.

‘Open a Jack Higgins novel and you'll encounter a master craftsman at the peak of his powers … first-rate tales of intrigue, suspense and full-on action.’
Sunday Express

‘Higgins is a master of his craft.’
Daily Telegraph

‘A thriller writer in a class of his own.’
Financial Times

Jack Higgins lived in Belfast till the age of twelve. Leaving school at fifteen, he spent three years with the Royal Horse Guards, and was later a teacher and university lecturer. His thirty-sixth novel, The Eagle Has Landed (1975), turned him into an international bestselling author, and his novels have since sold over 250 million copies and been translated into sixty languages. Many have been made into successful films. He died in 2022, at his home in Jersey, surrounded by his family.

But still a decent summer read.

Dark Justice was not my favorite Jack Higgins novel, but okay. I had some trouble keeping up with who's who, and got a bit bogged down with the plot. But he finished in classic Sean Dillon style.

Henry "Harry" Patterson (27 July 1929 – 9 April 2022), commonly known by his pen name Jack Higgins, was a British author. He was a best-selling author of popular thrillers and espionage novels. His novel The Eagle Has Landed (1975) sold more than 50 million copies and was adapted into a successful 1976 movie of the same title.Some of his other notable books are A Prayer for the Dying (1973), The Eagle Has Flown (1991), Thunder Point (1993), Angel of Death (1995), Flight of Eagles (1998), and Day of Reckoning (2000). His 85 novels in total have sold more than 250 million copies and have been translated into 55 languages. Early life Jack Higgins was born Henry Patterson on 27 July 1929 in Newcastle upon Tyne to an English father and a Northern Irish mother. When his father abandoned them soon afterward, his mother returned with him to her home town of Belfast, Northern Ireland, to live with her mother and her grandfather on the Shankill Road. Raised amid the religious and political...

● If you want to link to Dark Justice book page, please use the codes provided below!
L
C 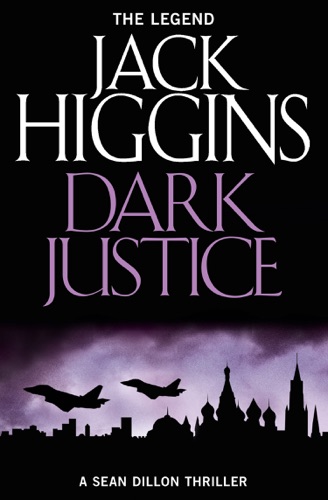