New York, 2061: The place called the Pleasure Academy is a living nightmare where abducted girls are trapped, trained for a life of abject service while their souls are slowly but surely destroyed. Dorian, a thirteen-year-old runaway who’d been imprisoned there, might never have made it out if not for her fellow inmate Mina, who’d hatched the escape plan. Mina was the more daring of the two—but they’d been equally desperate.

Unfortunately, they didn’t get away fast enough. Now Dorian is injured, terrified, and wandering the streets of New York, and Mina lies dead near the waterfront while Lt. Eve Dallas looks over the scene.

Mina’s expensive, elegant clothes and beauty products convince Dallas that she was being groomed, literally and figuratively, for sex trafficking—and that whoever is investing in this high-overhead operation expects windfall profits. Her billionaire husband, Roarke, may be able to help, considering his ties to the city’s ultra-rich. But Roarke is also worried about the effect this case is having on Dallas, as it brings a rage to the surface she can barely control. No matter what, she must keep her head clear--because above all, she is desperate for justice and to take down those who prey on and torment the innocent.

Nora Roberts (born Eleanor Marie Robertson on October 10, 1950) is an American author of more than 225 romance novels. She writes as J. D. Robb for the in Death series and has also written under the pseudonyms Jill March and for publications in the U.K. as Sarah Hardesty. Roberts was the first author to be inducted into the Romance Writers of America Hall of Fame. As of 2011, her novels had spent a combined 861 weeks on The New York Times Best Seller list, including 176 weeks in the number-one spot. Life and career Personal life Early years Roberts was born on October 10, 1950, in Silver Spring, Maryland, the youngest of five children. Both of her parents have Irish ancestors, and she has described herself as "an Irishwoman through and through". Her family were avid readers, so books were always important in her life. Although she had always made up stories in her head, Roberts did not write as a child, other than essays for school. She does claim to have "told lies. Really good o...

● If you want to link to Desperation in Death book page, please use the codes provided below!
L
C 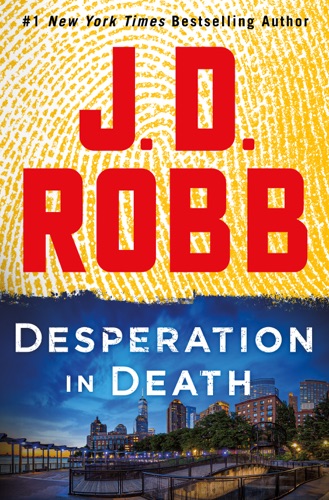