No Plan B by Lee Child & Andrew Child Book Summary

“No Plan B is not to be missed. A perfectly plotted, fast-paced thriller, with bigger twists than ever before. It’s no wonder Jack Reacher is everyone’s favorite rebel hero.”—Karin Slaughter

ONE OF THE BEST BOOKS OF THE YEAR: Reader’s Digest

In Gerrardsville, Colorado, a woman dies under the wheels of a moving bus. The death is ruled a suicide. But Jack Reacher saw what really happened: A man in a gray hoodie and jeans, moving stealthily, pushed the victim to her demise—before swiftly grabbing the dead woman’s purse and strolling away.

When another homicide is ruled an accident, Reacher knows this is no coincidence. With a killer on the loose, Reacher has no time to waste to track down those responsible.

But Reacher is unaware that these crimes are part of something much larger and more far-reaching: an arsonist out for revenge, a foster kid on the run, a cabal of powerful people involved in a secret conspiracy with many moving parts. There is no room for error, but they make a grave one. They don’t consider Reacher a threat. “There’s too much at stake to start running from shadows.” But Reacher isn’t a shadow. He is flesh and blood. And relentless when it comes to making things right.

For when the threat is Reacher, there is No Plan B.

No Plan B by Lee Child & Andrew Child Book Reviews

This was Jack reacher lite! No love um and leave um. I’ve read every teacher book, something was just missing. The young runaway didn’t fit even in the end.

Love the series, but this one was my least favorite. Short sentences, all characters talked similarly, and a disjoint plot line that was not fully centered on Reacher. If they don’t have a Plan C, it may be time to retire Reacher

SLP PA - Not the Same

Long term reader fans of Jack Reacher notice details that are not consistent with character. This novel had too many pieces that were not about Reacher, and went far too long with details difficult to sync. In the end, wrapped up in a few unsatisfying pages. Miss the Lee Child quality.

The book was an OK story classic reacher, and now with Andrew child seems like reacher stories has ran its course, and the series should be put to rest. I don’t think he should die in a lonely motel, but come back full circle to the woman. He was dating of the father‘s House he sold or hook up with Negley for a new series at least

Plenty of vintage Reacher mayhem, but the Child-duo has lost the thread of Jack “None” Reacher’s personality and appeal.

Obviously only written in the hopes of turning up into another movie. There’s zero literary value. I’ve read everything written by Lee child and this is a disaster. Poorly written no sense of anything. Go retire please

The series went from great to terrible…

Not his best. Overly descriptive and a bit slow. More a detective novel than an action novel.

JS Idaho - No plan B

It’s as good as it gets with Jack Reacher getting involved! Reacher, one of the best interesting characters of all time!!

Not the real Reacher or Lee Child. Reads like it was written by someone in 6th grade.

MajikMarker - I once loved these stories

The new collaboration on the writing of the latest Reacher novels is a complete disappointment for me. Reacher no longer sounds like Reacher. He was always violent but the last 3 books have made Reacher almost evil with over the top violence. No character development, they all sound the same and have the same ‘voice’. This is the ‘best’ of the last 3 novels, in my opinion, but that’s not saying much…it’s a very low bar.

Slow story line that didn’t get my heart beating fast at all. Too many three or four word sentences. Andrew Child is hurting Jack Reacher more than Reacher’s most dangerous adversaries.

Not one of the best, maybe it was written by an AI program?

Really disappointing in the last two Reacher books. I have read them all but won’t be plowing thru another Makes me sad because these were my favorite books

Everyone deserves a chance but just because your last name is Child does not give you a free pass….an opportunity maybe but at what cost to your audience? Seriously Lee? Andrew develop your own character and storyline without piggybacking on your brother then come back on your own and try like every aspiring author. Start your storyline and character for free and earn your stripes by yourself. This time you got my money….never again!!

I’m surprised and disappointed in Reacher’s increasing body count and cruelty. I like the plot lines and story.

VERY CONFUSING!! ONE OF THE WORST READS EVER. BELIEVE ANDREW IS TRYING TO REPLICATE DAD BUT NOT WORKING. HATE TO GIVE REACHER UP BUT……

Having read all The Reachers, this may be the best yet!

but the one’s with Andrew are bad.

I’ve read every novel in the Jack Reacher series and loved them all but this was very disappointing. It went into way too much detail when describing various places. Reacher seemed aloof at times and did not display his unique sense of humor in any situation. It took too long to develop both the plot and subplots. It was difficult to hold my interest. I simply finished it to finish it.

Wandered around a lot, not interesting characters. Formulaic.

Was good series, not anymore

Waste of time and money. May want to consider retirement if this is a sample of what the future is.

Patientbutfrustrated - I’ve read them all

The new ones with Andrew don’t compare. They’re okay, but not like the original.

pgarzaimages - Unknown what has happened.

Nothing remarkable. Started off stronger than it ended.

There’s $15 bucks I wasted. I’m halfway through this and still don’t get what’s going on. I’ll be more careful next time I buy Child’s Brothers book.

Better than the last two. Little complicated. Lead up to final scene was a little tough to digest.

shellyvcom - Great action with a taste of Elmore Leonard

Not the usual Reacher . Might be me but, who wrote this?

Writing is very choppy, jumps all over the place.

This book was very disappointing. Reacher wasn’t Reacher. The story rambled. The characters were poorly developed. This effort was unprofessional.

Been a huge fan for 25 years. If I’d read these reviews I would have still bought the book. Am disappointed beyond all reason. Actually stopped reading 1/3 in. I almost never do that with any book, no matter how bad. But this book is really bad. On a cellular level.

I really enjoyed this book

A terrific book as always. Lee Child has certainly brought Jack Reacher to life. Have read all the Reacher books and this is one of his best.

A plot line that doesn’t work. How did this get past editors?

Yobtvemat - Could be my last Reacher book

Too many characters, too many stories that improbably tie together. It’s been a great run and I guess I want to remember Lee/Reacher at their best. Had to force myself to keep reading and finish.

The story was original and kept me invested in the outcome. Great work!

The newer books with Andrew Child fell flat IMHO, this one delivered. Bravo!

Plot makes no sense. Action is entirely linear with far too many miracles. All characters, male or female, good or bad speak with the same voice. Reacher is now indestructible so fight scenes are predictable and mostly unbelievable. This book will not be transformed into a Prime television episode without a complete rewrite.

B33P3R - Does not seem like a genuine jack reacher novel

Not so great. Far fetched and not at all realistic. Bummer.

Reacher did not seem to be his normal likable self in this book. I found the plot to be more far fetched than previous books. I was disappointed in the book.

The best thing that can be said about this book is that it doesn’t take long to read because you don’t have to care about any of the thoroughly disposable characters. None of them have any depth, they’re just plot devices to get you to the next fight that Reacher will invariably win without even breaking a sweat. This series has devolved into a poorly-plotted nihilistic comic book that doesn’t deserve your time, attention, or money. Here’s a plan B, don’t buy this book.

The recent releases all follow the same outline- Reacher sees something that doesn’t really concern him, gets involved, reels in some partners, goes up against ridiculous odds- and comes out on top. You now have the plot of these books, which were fun and fresh for a long time.

Not nearly as good as other Reacher novels.

Jack Reacher witnesses a women being pushed in front of a bus. Witnesses say she leaped in front of the bus. Reacher chases the suspect but he gets away. The handling detective per his superiors closes the case as a suicide. The detective tells Reacher but he also gives credibility to Reachers version of the incident. What follows is an incredible read surrounding the people who run a prison in Minerva Mississippi.Its primary existence revolves around drugs, obtaining body parts from inmates and a host of illegal activities. Local law enforcement and a host of other people support the prison.Another excellent read in this series!! Enjoyed immensely!!

I was honored to receive an ARC from NetGalley and Random House Publishing-Ballantine. This opinion is my own. Maybe, just maybe not quite as good as his other books but STILL a 4 star read. I have read each book about Jack Reacher and it may be that this book is not as analytical when it comes to detailing Jack Reacher’s thoughts. This book is more fighting, hand to hand combat, as Reacher uses force to get where he needs to go. And less romance! As always though, it was an adventure

James Dover Grant (born 29 October 1954), primarily known by his pen name Lee Child, is a British author who writes thriller novels, and is best known for his Jack Reacher novel series. The books follow the adventures of a former American military policeman, Jack Reacher, who wanders the United States. His first novel, Killing Floor (1997), won both the Anthony Award and the Barry Award for Best First Novel. Early life and education Grant was born in Coventry. His Northern Irish father, who was born in Belfast, was a civil servant who lived in the house where the singer Van Morrison was later born. He is the second of four sons; his younger brother, Andrew Grant, is also a thriller novelist. Grant's family relocated to Handsworth Wood in Birmingham when he was four years old so that the boys could receive a better education. Grant attended Cherry Orchard Primary School in Handsworth Wood until the age of 11. He attended King Edward's School, Birmingham.In 1974, at the age of 20, ....

● If you want to link to No Plan B book page, please use the codes provided below!
L
C 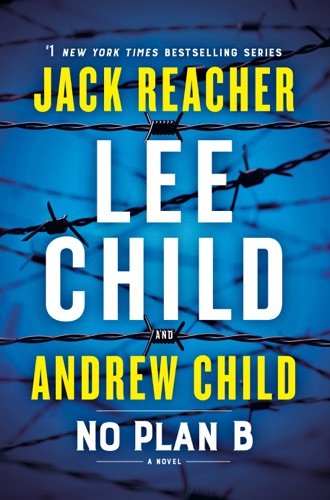