Nothing to Lose by J. A. Jance Book Summary

The newest thrilling Beaumont suspense novel from New York Times bestselling author J. A. Jance, in which Beaumont is approached by a visitor from the past and finds himself drawn into a missing person’s case where danger is lurking and family secrets are exposed.

Years ago, when he was a homicide detective with the Seattle PD, J. P. Beaumont’s partner, Sue Danielson, was murdered. Volatile and angry, Danielson’s ex-husband came after her in her home and, with nowhere else to turn, Jared, Sue’s teenage son, frantically called Beau for help. As Beau rushed to the scene, he urged Jared to grab his younger brother and flee the house. In the end, Beaumont’s plea and Jared’s quick action saved the two boys from their father’s murderous rage.

Now, almost twenty years later, Jared reappears in Beau’s life seeking his help once again—his younger brother Chris is missing. Still haunted by the events of that tragic night, Beau doesn’t hesitate to take on the case. Following a lead all the way to the wilds of wintertime Alaska, he encounters a tangled web of family secrets in which a killer with nothing to lose is waiting to take another life.

Nothing to Lose by J. A. Jance Book Reviews

First time reading this author. I really enjoyed the book.

This book is an interesting and enjoyable police procedural mystery. It’s a page turner that starts slowly and builds to a crescendo of action. Thanks for writing it .

J. A. Jance - Nothing to Lose Comments

About J. A. Jance Wiki

Judith Ann (J. A.) Jance (born October 27, 1944) is an American author of mystery novels. She writes three series of novels, centering on retired Seattle Police Department Detective J. P. Beaumont, Arizona County Sheriff Joanna Brady, and former Los Angeles news anchor turned mystery solver Ali Reynolds. The Beaumont and Brady series intersect in the novel Partner in Crime, which is both the 16th Beaumount mystery and the 10th Brady mystery. They intersect again in Fire and Ice. Biography Jance was born in Watertown, South Dakota, and raised in Bisbee, Arizona (the setting for her Joanna Brady series of novels). Before becoming an author, she worked as a school librarian on a Native American reservation (Tohono O'Odham), and as a teacher and insurance agent. Jance attended University of Arizona, graduating with a bachelor's degree in education in 1966, then a master's in library science in 1970. In 2000, University of Arizona awarded Jance an honorary doctorate.In July of 2018...

● If you want to link to Nothing to Lose book page, please use the codes provided below!
L
C 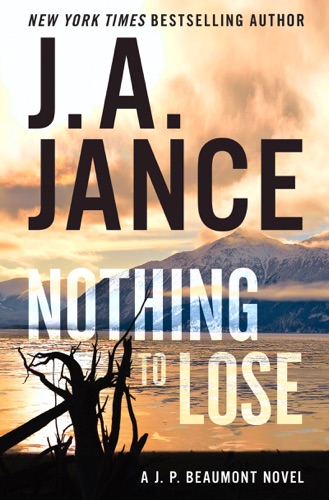