A Cowboy for Alyssa by Shirley Penick Book Summary

Looks can be deceiving, and a cowboy only gets one chance to make a good impression.

Alyssa Jefferson is ready to start her veterinary internship at the Rockin' K ranch, in the beautiful Colorado Rockies, where she will be assisting with the births of over three hundred pregnant cows. It's a dream come true, and she's so excited the joy is oozing from her. As icing on the cake, it appears the brothers that own the ranch are sexy as can be. A few months with some eye candy, is just what the doctor ordered.

Beau Kipling sees the sweet young thing coming for her riding lesson, and feels a kick to his gut. What is this hot young woman doing dating a man old enough to be her father? He's so ticked off, he can't stop himself from being an ass to her. He's never, in his whole life, felt the instant attraction he feels for this female, and she's some old guys arm candy.

When the truth is revealed, that Alyssa is his intern for the spring, and not the sheriff's new girlfriend, Beau knows he's blown it. And he can't even explain why he was so mean. No woman wants to hear a guy thought she was a gold digger. Now they must work together all spring. Can he convince her to give him a second chance?

A Cowboy for Alyssa by Shirley Penick Book Reviews

sbsbrinson - A Cowboy for Alyssa

dontforgetyour glasses - A Cowboy for Alyssa

Loved Beau and Alyssa as a couple. Beau’s family were really great . Great Enemies to friends story. I enjoyed it.

rjbor - A Cowboy for Alyssa

● If you want to link to A Cowboy for Alyssa book page, please use the codes provided below!
L
C 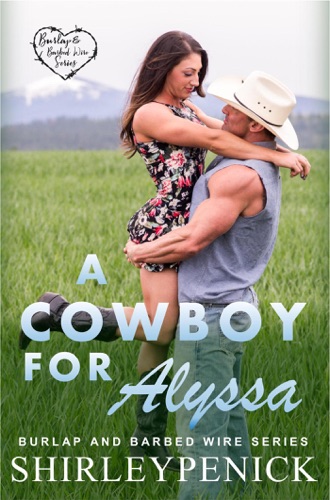