Woodward, the #1 international bestselling author of Fear: Trump in the White House, has uncovered the precise moment the president was warned that the Covid-19 epidemic would be the biggest national security threat to his presidency. In dramatic detail, Woodward takes readers into the Oval Office as Trump’s head pops up when he is told in January 2020 that the pandemic could reach the scale of the 1918 Spanish Flu that killed 675,000 Americans.

In 17 on-the-record interviews with Woodward over seven volatile months—an utterly vivid window into Trump’s mind—the president provides a self-portrait that is part denial and part combative interchange mixed with surprising moments of doubt as he glimpses the perils in the presidency and what he calls the “dynamite behind every door.”

At key decision points, Rage shows how Trump’s responses to the crises of 2020 were rooted in the instincts, habits and style he developed during his first three years as president.

Revisiting the earliest days of the Trump presidency, Rage reveals how Secretary of Defense James Mattis, Secretary of State Rex Tillerson and Director of National Intelligence Dan Coats struggled to keep the country safe as the president dismantled any semblance of collegial national security decision making.

Rage draws from hundreds of hours of interviews with firsthand witnesses as well as participants’ notes, emails, diaries, calendars and confidential documents.

Woodward obtained 25 never-seen personal letters exchanged between Trump and North Korean leader Kim Jong Un, who describes the bond between the two leaders as out of a “fantasy film.”

AmandaTripp - Fascinating look inside a monster

We are living through scary times and Woodward sheds light on the person running the show.

The stable genius’ own words are considered fake news by his loyal idiots. So happy Bob Woodward exposed this orange grifter. This is a good book. History won’t be kind to trump or his magat supporters, nor will the American people. We are sick of their chaos and destruction. Time to clean house!! BIDEN/HARRIS 2020

Best president in the history of America. Trump 2020👍👍

But they certainly need to. I think it’s hilarious the reviewers who call Woodward a Democrat. He’s Republican, or at least was before Trump. He has been critical of all administrations, Democrat and Republican. It’s just that this current president is so divisive and so catastrophically unfit for office, that this candid portrait of a chaotic White House would of course be negative; almost everyone who has quit or been fired, with the exception of a couple of sycophants, will tell you what a disaster he is. Woodward doesn’t have to paint a bad picture of Donald because Donald does that all by himself. If you’re a racist, of course you’ll want to back a president who believes and hates the way you do, so you’ll ignore the plethora of bad qualities this man exhibits on the daily.

This is just someone trying to help defeat President Trump in November. Its sad that so many Democrats want to overlook his accomplishments and put out garbage like this!

Excellent and unbiased. A testament to the type of journalistic ideals America is missing.

Trash rag by a political hack.

Joe Biden sniffs children and learned about roaches and kids jumping on his lap.

Longhorn5555 - Silly effort to cash in

A poorly written slap-dash effort to cash in. Whether you love or hate Trump, you be better off saving your money.

Bob Woodward is about as relevant as Ruth Bader Ginsberg. The incoherent ramblings of a jealous old Marxist. Purchase the Paper copy to at least get some toilet paper during the pandemic as a digital copy is just feeding America’s enemy’s. Save America vote Trump 2020

How Trump can say things on tape admitting to his deceit and his cult still think he walks on water is a testament to their lack of critical thinking. Biden 2020

Buy to read the truth. So many salty tears by these trump cultists on here! Trump is a failure in every way. Anyone with a brain can see that.

Mr. Woodward has exposed the conniving grifting moron that the orange idiot is. His sycophants are pathetic trash. Our democracy is being shredded by ignorance. God save the real Americans. 🗳⚖️🇺🇸

you can hear the disdain in his voice as you read the book. its clearly meant to cause as much harm as possible with truth being sacrificed in the process.

Unless you’re a liberal don’t read this. All it does is insult our president.

Top line: 😏1. In Rage, a brilliant book, Woodward confirms that Trump is and performs exactly as I suspected. 🤔2. As I considered Woodward’s literary painting of the person, Trump, and the power of the office in which he sits, and Mary T’s book a d Michael C’s book, I’m led further to: 3. 🤯. And you should be too. Anyone, and I mean anyone, who wants to more clearly understand the Trumpian years, now or in the future, must read, Rage.

Save your money and your time.

Who knew that when Republicans nominated a sad old game show host, just 4 years later we’d have refrigerator trucks being used as morgues because he lied and 200,000 people died. Oh, wait. Most people did.

money for stars - The truth will set you free.

Read the book and judge for yourself.

Please don’t reward a man who withheld important information about the President in order to sell more books.

Woodward is a pillar of journalistic integrity who isn’t afraid of pissing off lame duck presidents like trump.

Mr. Woodward, you are such a respected investigative journalist. Please investigate and write a book about the Trump collusion scandal. The Obama/Biden administration attempted a coup on a duly elected president, which is far more sinister than the Watergate Scandal. Please expose this horrible conspiracy.

More of the same, blah blah blah! Book deals just aren’t what they used to be.

The author did a great job explaining what trump when though 100/10!!! My favorite nook ever!!!

No wonder why journalism is dead. Trump just made another peace ✌🏿 agreement in the middle East. That's 2! Woodard has bashed every president for the last 40 years.

Stunning revelations from Trump’s own mouth. “I downplayed the virus, I still want to downplay the virus “. Read this book to learn the dangerous truths about Trump from his own mouth.

Hard to read because it rings so true to what we see and worry about. Our president is unfit.

proud to be a libtard😌✌️

my cat ate my foot

Thanks for nothing apple. You were happy to take my money on a preorder. And yes, I could download the book to my phone. But not to my iPad, which is where I read books. iPad is less than a year olds and running current IOS. Disgusted. Last iBook for me - Kindle from now on. Nowhere to contact for support.

Robert Upshur Woodward (born March 26, 1943) is an American investigative journalist. He started working for The Washington Post as a reporter in 1971, and currently holds the title of associate editor.While a young reporter for The Washington Post in 1972, Woodward teamed up with Carl Bernstein; the two did much of the original news reporting on the Watergate scandal. These scandals led to numerous government investigations and the eventual resignation of President Richard Nixon. The work of Woodward and Bernstein was called "maybe the single greatest reporting effort of all time" by journalist Gene Roberts.Woodward continued to work for The Washington Post after his reporting on Watergate...
● If you want to link to Rage book page, please use the codes provided below! 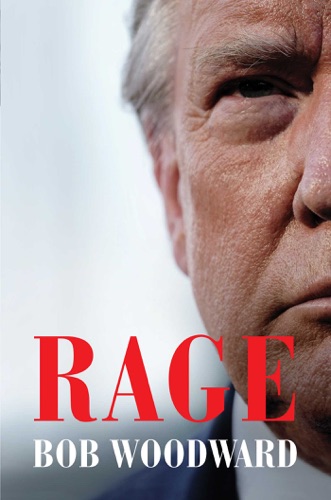