The Ides of March by Thornton Wilder Book Summary

The classic Thornton Wilder novel that recreates the dazzling ancient Roman empire of Julius Caesar—now with a new introduction by Jeremy McCarter, author of Young Radicals and co-author (with Lin-Manuel Miranda) of the #1 New York Times bestseller Hamilton: The Revolution.

First published in 1948, The Ides of March is a brilliant epistolary novel of the Rome of Julius Caesar. Through imaginary letters and documents, Wilder brings to life a dramatic period of world history and one of its magnetic personalities.

In this novel, the Caesar of history becomes Caesar the human being as he appeared to his family, his legions, his Rome, and his empire in the months just before his death. In Wilder’s inventive narrative, all Rome comes crowding through his pages: Romans of the slums, of the villas, of the palaces, brawling youths and noble ladies and prostitutes, and the spies and assassins stalking Caesar in his Rome.

The Ides of March by Thornton Wilder Book Reviews

Thornton Niven Wilder (April 17, 1897 – December 7, 1975) was an American playwright and novelist. He won three Pulitzer Prizes — for the novel The Bridge of San Luis Rey and for the plays Our Town and The Skin of Our Teeth — and a U.S. National Book Award for the novel The Eighth Day. Early years and family Wilder was born in Madison, Wisconsin, the son of Amos Parker Wilder, a newspaper editor and later a U.S. diplomat, and Isabella Thornton Niven.Wilder had four siblings as well as a twin who was stillborn. All of the surviving Wilder children spent part of their childhood in China when their father was stationed in Hong Kong and Shanghai as U.S. Consul General. Thornton's older brother, Amos Niven Wilder, became Hollis Professor of Divinity at the Harvard Divinity School. He was a noted poet and was instrumental in developing the field of theopoetics. Their sister Isabel Wilder was an accomplished writer. They had two more sisters, Charlotte Wilder, a poet, and Janet Wilder ...

● If you want to link to The Ides of March book page, please use the codes provided below!
L
C 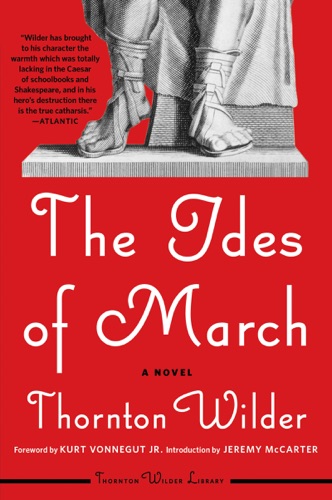