A gift from the gods…

Veritas and Ian have finally defeated their worst enemy, but the power it took to pierce through to the netherworld has unexpected consequences. Soon, Veritas is forced to rely on the last person she trusts---a golden deity named Phanes, who seeks far more than a temporary alliance with the beautiful vampire.

But an escape from the netherworld soon pits Veritas and Ian against supernatural beings seeking to rule over mortals once again.  Now, they must rally friends and foes alike—if the vampire council doesn’t execute Veritas first. Plus, a wedge between Veritas and Ian threatens to destroy their love. Can they stand together against the unearthly powers about to be unleashed? Or does their love—and humanity—not stand a chance?

Doingthisforcoinsssssdzzzzz - So Much Here to Delight

An enthralling tale. Ian and Veritas face unmountable odds in their quest to protect the world against ancient gods with a grudge. As they maneuver through the intricacies of other world politics, alliances, and centuries old prejudices, those whom they call friends and family come stand with them. But will it be enough?

Great read! Will we get another book in this series?

This book so fast paced and exciting. Packed with humor and passion that is solely Ian and Veritas!! A must read that brings in old friends from the Huntress World.

Jeaniene Frost (born 1974) is an American fantasy author, known for her work on the New York Times and USA Today bestselling Night Huntress series and the Night Huntress World novels. Foreign rights for her novels have sold to nineteen different countries. Frost first came up with the idea for the Night Huntress series after dreaming of a couple arguing. "In my dream, I saw a man and a woman arguing. Somehow I knew the woman was a half-vampire, the man was a full vampire, and they were arguing because he was angry that she'd left him." This formed the basis for the second book; the first book details the circumstances under which the couple was separated. The series spans seven books, not in..
● If you want to link to Wicked All Night book page, please use the codes provided below!
L
C 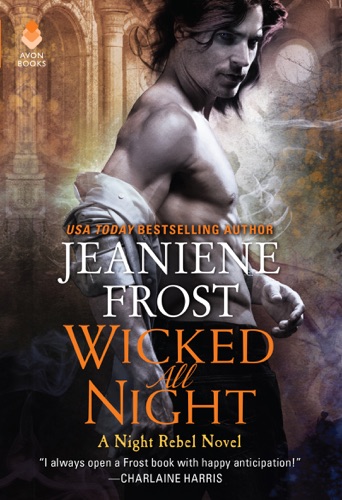