A Time for Mercy by John Grisham Book Summary

Jake Brigance is back! The hero of A Time to Kill, one of the most popular novels of our time, returns in a courtroom drama that The New York Times says is "riveting" and "suspenseful."

Clanton, Mississippi. 1990. Jake Brigance finds himself embroiled in a deeply divisive trial when the court appoints him attorney for Drew Gamble, a timid sixteen-year-old boy accused of murdering a local deputy. Many in Clanton want a swift trial and the death penalty, but Brigance digs in and discovers that there is more to the story than meets the eye. Jake’s fierce commitment to saving Drew from the gas chamber puts his career, his financial security, and the safety of his family on the line.

In what may be the most personal and accomplished legal thriller of John Grisham’s storied career, we deepen our acquaintance with the iconic Southern town of Clanton and the vivid cast of characters that so many readers know and cherish. The result is a richly rewarding novel that is both timely and timeless, full of wit, drama, and—most of all—heart.

Bursting with all the courthouse scheming, small-town intrigue, and stunning plot twists that have become the hallmarks of the master of the legal thriller, A Time for Mercy is John Grisham’s most powerful courtroom drama yet.

There is a time to kill and a time for justice. Now comes A Time for Mercy.

A Time for Mercy by John Grisham Book Reviews

A BYQ Fan - Good Read, but went off trail at times

I didn’t like it, I LOVED IT! Did not like the occasional jumping to other seemingly less relevant cases, but that is a miner complaint on a good book

A great read but a perfectly predictable ending. Much more character development and detail into the topic of housing, food insecurity along with poverty and abuse then I expected. A timely novel as many are facing these challenges.

Loved nearly everything about this book: Jake is back, more of Carla, a new brilliant young Black woman is mentored by Jake; Harry Rex and Lucian return; and Noose reigns over the circuit. A tender and heartbreaking beginning to what is sure to be another book. His best in several years.

Took a bit to get into. Probably a bit long but generally pretty good.

Just like a fine wine, you want to savor every last page in this book. Every character becomes personal and familiar. I have read every JG book and he never disappoints. Unlike other writers who seem to have sold out to make a dollar, Grisham seems to write for the pleasure of his audience. Can’t wait till the next one.

It was a good read until the end. Very disappointing. I was waiting for a resolution or a twist or a revelation. Anything. It’s like he had no interest in making a compelling ending. He just wrapped up loose ends with expected bland outcomes.

The action stops soon after the beginning. It resumes at the trial and then stops again. The characters are not living their lives, they are acting good. Even bad people are acting good. You’ll get more life, drama and the fight between good and evil - up to the Supreme Court! - in some documentary books, like License to Lie by Sidney Powell. How could the good writer have written a book that is duller than real life?

Well told story with interesting characters. The ending was soft...

Igamitzu - A Time For Mercy

So promising and yet so disappointing, specially the ending, almost like Grisham was in a hurry to finish. Yes, it's nice that Jake and Carla adopted Kiera's son and that Hanna has a baby brother but really, is that what this story is about???

Pick this - A Time for Mercy

Did not like the ending....to many open ends. Smallwood case? Drew Gamble? Jake’s financial standing? Etc. Not his best book, good but not the best.

As usual Grisham spins a great legal tale that was difficult to put down. The characters were well formed and each added to the story. I can see a future Brigance book with Portia as a full fledged future partner. My only disappointment was I found the ending of the story a little short of resolution.

I love Grisham books, but his last two books before this book from Camino Island were bad. This book has a good story, but again Grisham disappoints with secondary plots concluding, but the primary story is left open ended. I’m really getting tired of spending my money just to have Grisham disappoint again.

Love John Grisham books but I had a difficult time keeping my attention to this book. It was all very predictable and the ending was soft...unless there is a sequel. Characters were not realistically presented considering the topics...that were disturbing to say the least.

Lynngal - A Time for Mercy

Awesome book. Made me contemplate on life’s fairness. I would totally recommend!

I think this was his best work yet... Excellent story and a good ending too.

Kenschaub - Not One of the Better Grisham Stories

For an author who hits triples and home runs with his novels I found this one to be a sliding double at best. I don't think, after this story, that I want to ever catch up with the hero, Jake Brigance, ever again. It wore me down to read of Jake's financial troubles, the looney tune Judge Noose, and two cases that never really get satisfactorily resolved. I found that Jake's wife's increasingly outsized role in the story was a head shaker (why this?) as an actress impromptu jury consultant culminated in fulfillment of her wish to adopt a baby born out of wedlock by Jake's 14 year old client. Writing is hard work. Weaving a good yarn is even harder. You can't swat a homer every time up at bat. Even Babe Ruth, who once led the league in home runs, also once led the league in strikeouts.

I was really looking forward to this book, it was not worth the wait. Jake has the worse luck of any lawyer I have ever read about or worked with. Non supporting wife (again) unless it benefited her. If there was no discuss about all the money Jake does not have the book work be about $100 pages long. And the worse part was the adoption, so very wrong.

Short of the first 30 pages, this is the most boring book from John Grisham. Nothing heart pounding or page turning here. Very predictable. Frankly, you could skip entire chapters and lose nothing in the story. The story references the Carl Lee book entirely to much.

Lolopaga - Loved the continue of Jake Brigance and Ford County

The story was a quick read and it was fun the Carl Lee Hailey and Carla Brigance played such prominent support roles. I️ admit that it was hard to read without hearing the dialogue coming from Samuel L Jackson and Matthew McConaughey.

I can hardly wait for more!

This book was in no way, a symbolic return of Jake Brigance. SPOILER ALERT . . I really tired of hearing how broke he was. I really tired of the fillers with Lucien and Judge Noose. But more than anything, I was very disappointed with the ending. It either leaves the reader hanging, or maybe a future continuance of the story. Not happy I shelled out money for this.

I haven’t read a Grisham book in a while. I don’t know what happened but he seemed to have lost his mojo. This book was different. I read the sample & was hooked. This is it. John Grisham is back & at his best. It’s been a long time coming & definitely worth the wait! Thank you for writing a book I didn’t want to stop reading. That had characters I cared about & a fantastic story. If you love “old” John Grisham this book is for you!

Good read and great chance to get reacquainted with old characters.

The best Grisham Novel since The Firm!

Halsterx - All Time for Mercy

3.5/5 stars An enjoyable read and an interesting legal dilemma. Read it in a day. Nice to get reacquainted with the old characters. The book was not nearly as dramatic and plot twisting as “A Time to Kill”. Hal R

Cliff Lien - A Grisham of old.

I could barely stop reading long enough to eat a meal.

Great read, but leaves many loose ends, unlike the previous Brigance books

John Ray Grisham Jr. (; born February 8, 1955) is an American novelist, attorney, politician, and activist, best known for his popular legal thrillers. His books have been translated into 42 languages and published worldwide. Grisham graduated from Mississippi State University and received a J.D. degree from the University of Mississippi School of Law in 1981. He practiced criminal law for about a decade and served in the Mississippi House of Representatives from January 1984 to September 1990.His first novel, A Time to Kill, was published in June 1989, four years after he began writing it. According to Academy of Achievement his books have sold 300 million copies and he has written 28 conse..
● If you want to link to A Time for Mercy book page, please use the codes provided below! 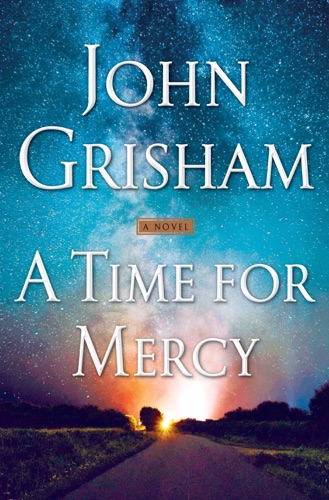