Get to know your Apple Watch and customize it to help you focus on what you care about most. Tech expert Jeff Carlson helps you understand the watch mindset, pick the watch model that’s right for you, set up and share its faces and their complications, get the notifications you want, handle communications, and learn how the controls and core apps work.

Since its introduction in 2015, the Apple Watch has become the world's best-selling watch, as well as the most popular wearable digital device. During that time, Apple has also added numerous new watch product lines, vastly expanded the device's capabilities, and enabled developers to create entirely new apps and tools. The Apple Watch hides an enormous amount of technical complexity behind that unassuming touch screen, and with help from author Jeff Carlson, you'll unlock every last bit of its power.

Take Control of Apple Watch is an expanded and updated reworking of Jeff's earlier book on this topic, Apple Watch: A Take Control Crash Course. This new book covers all Apple Watch models through Series 6 and SE, as well as all the new features introduced in watchOS 7.

Jeff walks you through getting to know the Apple Watch (including how to pick one out if you haven’t already), along with topics that teach you how to navigate among the watch’s screens with the physical controls, taps on the screen, and Siri. You’ll also find advice on customizing watch faces and sharing them with others, taking advantage of the blood oxygen sensor in the Apple Watch Series 6, getting the notifications you want, handling text and voice communications, using Apple’s core apps, and monitoring your heart rate, hearing, and monthly cycle to improve your overall health. A final chapter discusses taking care of your Apple Watch, including recharging, restarting, resetting, and restoring.

Among the many topics covered in the book are:
• Picking out your own Apple Watch—covers models up through Series 6 and SE • Important actions you'll want to take when first setting up your watch • Making watch face complications work for you • Key settings that most people will want to know about • Using the Control Center and Dock • Understanding how the watch interacts with your iPhone • Staying connected using a cellular-enabled Apple Watch model • Tracking your exercise, even when you leave your iPhone at home • Placing and receiving phone calls on the watch • Using the Walkie-Talkie feature to chat with other Apple Watch owners • Sending default (and customized) text messages • Seeing email from only certain people • Adding items to your reminder lists with Siri • Glancing at what’s next in your daily schedule • Loading your watch with photos and using them to create new watch faces • Triggering the iPhone’s camera remotely using the watch • Paying at contactless terminals using Apple Pay • Putting tickets in your watch • Using health-related features such as the blood oxygen sensor, ECG, Cycle Tracking, and Noise apps • Getting navigation directions (and using the Compass app) • Controlling an Apple TV, or Music or iTunes on a Mac with the Remote app • Unlocking a Mac (and authenticating certain actions in Catalina or later) with your watch • Adding apps to the watch via your iPhone or the watch's built-in App Store • Resetting a messed-up Apple Watch and force-quitting an app

● If you want to link to Take Control of Apple Watch book page, please use the codes provided below!
L
C 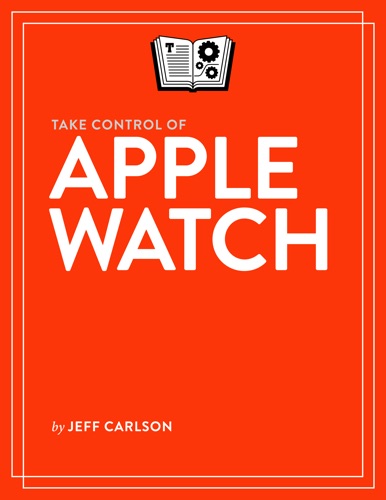