From the New York Times bestselling author of Tom Clancy: Code of Honor (The Jack Ryan Universe)  comes  the first in the acclaimed Arliss Cutter series set in the beautiful and deadly wilds of Alaska.

U.S. Marshal Arliss Cutter is a born tracker. After enlisting in the military, fighting in the Middle East, and working three field positions for Marshal Services, Cutter is sent to the icy wastelands of southeast Alaska. Three people have disappeared on Prince of Wales Island.

Two are crew members of the reality TV show, Alaska Adventure Jobs. The other is a Tlingit Indian girl who had the misfortune of witnessing their murders. Cutter’s job is to find the bodies, examine the crew’s footage for clues, and track down the men who killed them. Easier said than done. Especially when the whole town is hiding secrets, the trail leads to a dead end—and the hunter becomes the prey . . .

This author is as good as any at the top Jack Reacher style main character, slow to anger but an all out assault kind of guy when the occasion calls for it. A “ right is right” type of guy. I’d read it again but there is a follow up book, so....

Agatha would have been proud of this! Great characters & a challenge to find the “bad guy”. I’m a “spook”girl favoring spies. Big surprise...this guy can write up a storm.

Great geographical change of pace. Fast paced. I had to put on an extra blanket after reading this one.

● If you want to link to Open Carry book page, please use the codes provided below!
L
C 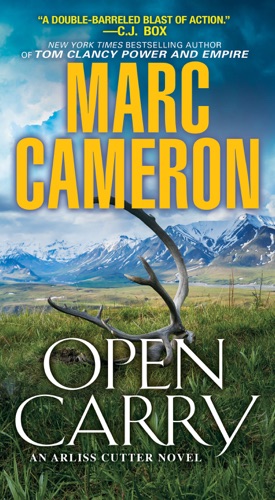