A journalist who's been attacked by Antifa writes a deeply researched and reported account of the group's history and tactics.  When Andy Ngo was attacked in the streets by Antifa in the summer of 2019, most people assumed it was an isolated incident. But those who'd been following Ngo's reporting in outlets like the New York Post and Quillette knew that the attack was only the latest in a long line of crimes perpetrated by Antifa. In Unmasked, Andy Ngo tells the story of this violent extremist movement from the very beginning. He includes interviews with former followers of the group, people who've been attacked by them, and incorporates stories from his own life. This book contains a trove of documents obtained by the author, published for the first time ever.

I had a hard time putting this book down every day. It is unbelievable to see how much the corporate media is suppressing the truth

All you need to know about Ngo is that he puts on a British accent because he’s so obsessed with making conservatives like him. This book was made to distract people from the true threat to American democracy, White Supremacy. On January 6th a coalition of Oathkeepers, Proud Boys, Qanoners, and MAGAheads stormed the Capitol chanting “hang Mike Pence.” I don’t have a problem with reporting on and questioning Antifa but is very evident that Ngo is acting in bad faith.

I read this in order to gain perspective from a mindset I was not familiar with. What I believe I read was a brainwashed man’s version of revisionist history. Thoroughly disappointed. You can actually use this as a case study in misinformation and Fox News subjugation.

mikeerob26 - Every conservative should read this

(Conservatives) we needed this... anyone interested in saving this country should read this..

This book is the only thorough depiction on the subject I have seen distributed. Mr. Ngo deserves recognition for his efforts and an deserves an opportunity to share his analysis with the public. The book has some subjective elements at time but overall is an eye opening case study of a widely mischaracterized faction containing incentivized individuals willing to harm anyone or anything they choose.

I can speak from experience. I knew Andy before he even thought about becoming a journalist. We met in college. He was the only person who befriended me without hesitation. I'm in an electric wheelchair because I have a rare form of muscular dystrophy. People tend to be uncomfortable around me. I hate it. It's like I'm contagious or something. Andy was the only person who didn't give off that vibe. We instantly became friends. He asked me questions about me whenevver he was curious, but that was never our conversation focus. We took design classes together and always partnered up. He even cooked at my apartment one time! We were friends. Good friends. After college, we went in different directions in life, but I still consider Andy a good friend. When I saw he became a journalist, I knew he was speaking from the heart and trying to show the world what has become of his hometown. Andy has no hidden agenda. He's just trying to save the place he grew up in, like we all would. I wish more peoply had the morals and values Andy has.

Ngo is a true patriot for calling Antifa for what it truly is a Communist Terrorist Network. God Bless him and his family.

Unlike lazy, intellectually dishonest stuffed shirts like LA Times Alexander Nazaryan, Andy Ngo had the courage to visit his subject matter in the flesh. Nazaryan, who likely did not even read the book he so flippantly criticized, demonstrates his Antifa-apologist stance with a health mix of homophobic slurs (e.g. Andy Ngo being attacked by Antifa with “(almost certainly) a vegan milkshake”). This lazy, slur-riddled critique from “mainstream media” dunces like Nazaryan point to what makes this book such a great read. Andy Ngo writes from his actual experience, not from ideological dogma. What deceptive hacks like Nazaryan don’t understand is that most of America is on to them. Like Jerry Nadler saying “Antifa is a myth” or Biden saying “Antifa is an idea”, we’ve seen too much to believe their lies. This book is an excellent view into a clear and present danger our country faces.

After ANTIFA burns down businesses, loots, destroys communities-ostensibly under fighting for the oppressed but in reality-for the advancement of communism they will be future lawyers, politicians, and authority figures. We think they are radical now. Wait until they are given the power to dictate through executive orders. Either way, Andy Ngo has more balls than all of ANTIFA put together. Great book.

While I agree with a previous review that this book does not flow exceptionally well, I found it very enlightening. I salute Andy Ngo for his tenacity and his bravery. Mr. Ngo recognizes that free speech and liberty cannot be separated and points out the hypocrisy of Antifa’s campaign to silence those that do not agree with them.

Of course the only review available to read on Apples site is a disinformation negative review Meanwhile there’s many many more five star reviews available on this very same book. I’ll never buy another Apple product.

The information is not delivered in a concise, organized way. It’s almost like getting an assault victims story right after he’s just been beaten. It’s all over the place. Some of it doesn’t sink in, you don’t fully grasp what you’re reading because it’s delivered in a way that’s not conducive to absorption. It moreso resembles a reactive “grab and give” information “as it comes to me” telling, than it does a well thought out piece designed to deliberately bring total understanding to the reader. I would’ve liked to have seen the author take a deep breath and refine it another 20 times until it was a condensed, simplified tale with all the hard hitting facts lined up. As it is here, I’m walking away with the glib phrase running through my mind, “Antifa bad."

Andy Cuong Ngô (born c. 1986) is an American conservative journalist and social media personality known for covering and video-recording demonstrators. He is the editor-at-large of The Post Millennial, a Canadian conservative news website. Ngo is a regular guest on Fox News and has published columns in outlets such as the Wall Street Journal and The Spectator. Ngo's coverage of anti-fascist groups and Muslims has been controversial, and the accuracy and credibility of his reporting have been disputed. He has been widely accused of sharing misleading and selectively edited videos, described as a provocateur, and accused of having links with militant right-wing groups in Portland. Earl...

● If you want to link to Unmasked book page, please use the codes provided below!
L
C 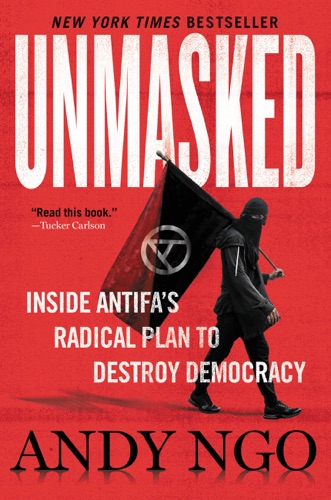