The Book of Longings by Sue Monk Kidd Book Summary

“An extraordinary novel . . . a triumph of insight and storytelling.” —Associated Press

An extraordinary story set in the first century about a woman who finds her voice and her destiny, from the celebrated number one New York Times bestselling author of The Secret Life of Bees and The Invention of Wings

In her mesmerizing fourth work of fiction, Sue Monk Kidd takes an audacious approach to history and brings her acclaimed narrative gifts to imagine the story of a young woman named Ana. Raised in a wealthy family with ties to the ruler of Galilee, she is rebellious and ambitious, with a brilliant mind and a daring spirit. She engages in furtive scholarly pursuits and writes narratives about neglected and silenced women. Ana is expected to marry an older widower, a prospect that horrifies her. An encounter with eighteen-year-old Jesus changes everything.

Their marriage evolves with love and conflict, humor and pathos in Nazareth, where Ana makes a home with Jesus, his brothers, and their mother, Mary. Ana's pent-up longings intensify amid the turbulent resistance to Rome's occupation of Israel, partially led by her brother, Judas. She is sustained by her fearless aunt Yaltha, who harbors a compelling secret. When Ana commits a brazen act that puts her in peril, she flees to Alexandria, where startling revelations and greater dangers unfold, and she finds refuge in unexpected surroundings. Ana determines her fate during a stunning convergence of events considered among the most impactful in human history.

Grounded in meticulous research and written with a reverential approach to Jesus's life that focuses on his humanity, The Book of Longings is an inspiring, unforgettable account of one woman's bold struggle to realize the passion and potential inside her, while living in a time, place and culture devised to silence her. It is a triumph of storytelling both timely and timeless, from a masterful writer at the height of her powers.

The Book of Longings by Sue Monk Kidd Book Reviews

LSU Sue - A different imagining of what might have been

Real enjoyed this fictional Biblical based novel. I’ve also read The Red Tent and this has a similar theme. Ana is a well developed main character with flaws and a dream. Relatable for many women who are still seeking their voice. I also enjoyed the author’s note at the end of the book, which answered a few questions that I had.

Mom is on it! - Facinating

I found myself enthralled with the story and even more curious where fact met fiction. The historical aspect woven into the story is completing and believable whether there is truth or not. Another standing ovation for the author.

SugarCreekgal - The Book of Longings

I didn’t know this book’s topic or premise when I bought and downloaded it. At first, I thought I might not even read it once I realized it was about Jesus and a (maybe) fictional wife. But, am I ever enriched from reading this. I recommend it highly and widely. It is, simply, amazing.

Emotional, moving, and erudite—this book stayed with me for days after finishing it.

maxiesma - The Book of Longings

Trite. Short sentences. The only reason it is listed is the sensational subject matter. Don’t buy!

I want to say that Sue Monk Kidd is one of my all time favorite authors but this book fell flat. I did like that she wanted to give women of biblical times a voice and to focus on the plight of women in this era of time. In that sense, it reminds me of a book I love called “Pope Joan “ about a fictional woman who pretends to be a man and becomes Pope. It’s all conjecture (based on some historians theories that there was a women Pope). But does a brilliant job on focusing on what a women’s life was like at that time. An Book of Longings is equal in this. I think the author was trying to create something shocking by giving Jesus a wife (but in fact, this is not at all a new concept and has been written about extensively) but then wanted to appease Christians who would surely be offended so she created a character, Ana, that never exited instead of choosing a real person (like Mary Magdalene). If you are interested in a book about what the life of Jesus the man may have looked like, read Holy Blood, Holy Grail. Granted, this is not a Novel but a nonfiction scholarly book which uses a large amount of research to support its theories. There are also many books about Jesus visiting India during the “missing years” of ages 12-30. I liked this book for the voice it gives women but I think she should’ve kept it more fiction and not tried to make it a historical fiction novel unless she was willing to do the research to make it more accurate. It could have been equally powerful or even more powerful without making Ana the wife of Jesus. On the other hand, if it’s focus was to be the wife of Jesus, choose a real woman (May Magdalene, for example, much maligned as a prostitute despite nothing in the Bible saying so- I’m fact, a Pope in the Middle Ages declared this). Imagine if she had been the wife that the Catholic Church had wanted to discredit and this novel gave HER a voice. It would have been a much more intriguing novel..... but also much more controversial and I think Sue Monk Kidd shied away from the controversy and compromised. And that is my disappointment. Overall, it was entertaining and enjoyable to read and still far better than most novels. So I do feel it’s worth a read. Just don’t expect an extensively researched historical novel. For that, read one of the books listed above or a book by Phillips Gregory (different era, of course).

Beautifully written. I’m in awe! Jesus is portrayed as perfectly as I could have imagined and was perfectly paired with Ana! She was such a well placed character in this story. She had fire to her every women should possess. This is absolutely one of my favorite books! A must read. I felt happiness, joy and tears so many times through out the book. Well done!!

Great start to a series! - Extraordinary

What a story this is. The story of a woman who might have been Jesus’ wife, spanning the time shortly before he begins his mission to his death. A surprising story. Not a story about the type of woman we might expect to be Jesus’ wife, not his Little Helper, quiet, devout, always by his side, deferring to him, acquiescing to his every wish. Instead it’s the story of a strong woman with a voice that will not be silenced who makes her own path, finds her destiny and satisfies her longings. It’s a story about her everyday relationship with him and her influence on him, and His influence on her and His understanding of the unique person she was. Ana is very much her own person and always has been. Her background and personality are nothing like that of Jesus. She comes from wealth and privilege, isn’t always a nice person, is often selfish and self-centered. In other words, often human She isn’t necessarily a believer either, but her love for Jesus is deep. It came over her the first time she saw him and never wavers. We don’t know that Jesus had a wife, but we don’t know that he didn’t either, since the Bible doesn’t tell us much about those years. Author Sue Monk Kidd flawlessly weaves the “what if’s” with what we already know of Jesus’ life and presents a story that is completely plausible and believable, and completely mesmerizing, filled with characters that could have been part of history. Her parents, her aunt Yaltha, her friend Tabitha, and her brother Judas – that Judas – all come alive. As does the human Jesus, leading an everyday life as a husband, brother and son, while being drawn to a higher purpose. Women were meant to be silent and obedient in this time and place. Wealth, privilege, or association with a powerful ruler did not exempt you from danger. Again, author Kidd weaves in facts about known historical figures with events and consequences in the lives of Ana and her friends and relatives. The Book of Longings is extraordinary, touching, thought-provoking and a very enjoyable read. I received an advance copy from publisher Random House. All opinions are my own. I thoroughly enjoyed this book and recommend it without hesitation.

Sue Monk Kidd (born August 12, 1948) is a writer from Sylvester, Georgia, USA, best known for her novels The Secret Life of Bees and The Invention of Wings. Early life and education Kidd was born in Sylvester, Georgia, and attended local schools. She graduated from Texas Christian University with a B.S. in nursing in 1970. She worked in her twenties as a Registered Nurse and college nursing instructor at the Medical College of Georgia.She was influenced in her 20s by the writings of Thomas Merton to explore her inner life. In her 30s, she took writing courses at Emory University and Anderson College in South Carolina, now Anderson University, as well as studying at Sewanee, Bread Loaf, an...

● If you want to link to The Book of Longings book page, please use the codes provided below!
L
C 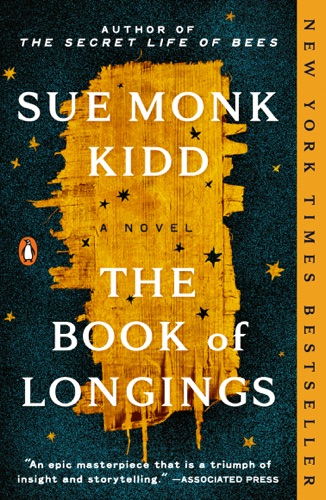