Do you trust the liberal media? While the tabloid and right-wing press - the Sun, The Times, the Mail and the Express - are constantly criticised for dangerous bias, outlets like the BBC and the Guardian are trusted by their readers to report in the interests of the public. However, the reality is that all corporate media is systematically filtered by the powerful interests that own, manage and fund it.

Propaganda Blitz shows that the corporate media does not just 'spin' the news - it fundamentally distorts everything it touches, hiding the real issues from public view, and often completely reversing the truth. This book uncovers a storm of top-down campaigns behind war reporting from Iraq, Syria and Palestine, as well as the destruction of the credibility of figures on the left, including Jeremy Corbyn, Russell Brand and Hugo Chavez.

Exposing propagandists at the top levels of the BBC, as well as their reporting on the Scottish independence referendum, the dismantling of the NHS and looming climate chaos, Propaganda Blitz explains the real meaning of 'objective' journalism, exposes the fake news about 'fake news' and outlines a model for anti-business media activism.

David Cromwell (born 1962) is a British media campaigner and oceanographer. With David Edwards, he is a co-editor of the Media Lens website. Cromwell was born in Glasgow. His mother was a practicing Catholic while his father was an activist and communist sympathiser. He spent his formative years in Barrhead and, mostly, Cumbernauld and graduated from the University of Glasgow with a degree in physics and astronomy. After completing a PhD in solar physics from the same university, which he was awarded in 1987, Cromwell moved to the United States in 1988 to pursue a year-long postdoctoral research at the National Center for Atmospheric Research in Boulder, Colorado. Returning to Europe, Cromwell joined Shell International in 1989 as an exploration geophysicist. After five months of training in geology, geophysics, and management skills, Cromwell was posted to Shell's exploration and production company in Assen, Netherlands, while living in nearby Groningen. He left Shell in 1993. At th...

● If you want to link to Propaganda Blitz book page, please use the codes provided below!
L
C 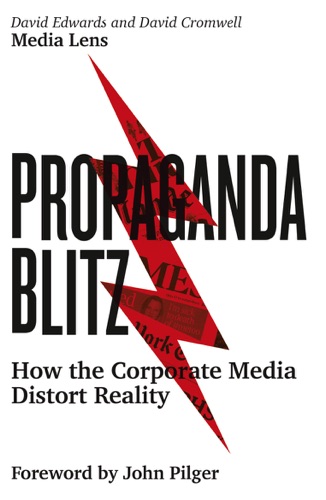