Unsolved deaths. Untold treasure. Can she uncover the secret of her inheritance before dark forces claim another victim?

Graysie Castellanos is ready to take her final bow. When the traveling singer inherits a rundown mine, she thinks it's her golden opportunity to provide her adopted daughter with a happy childhood and a prosperous future. But their bright new beginning crumbles underfoot when the townsfolk of the Sierra Nevada mining town start dropping dead of mysterious causes.

If Nathan Russell had listened to his gut, he'd have cleared out of Grass Valley before the first corpse turned cold. But the Aussie-born adventurer refuses to abandon the gorgeous singer and her young child to their doom. And when his old rival arrives in town looking to stir up trouble, he only gets pulled deeper into the mystery of the dark forces taking control.

With no choice but to press forward, Graysie and Nathan must solve the riddle of the deaths before the shadowy culprit adds their names to the tombstone.

Poisoned Legacy is the first book in the absorbing Of Gold & Blood historical mystery series set on the California frontier. If you like accurate details, edge-of-your-seat suspense, and a glimmer of romance, then you'll love Jenny Wheeler's sparkling saga.

Jennifer Sylvia "Jenny" Wheeler is an Auckland newspaper journalist, magazine editor, author and company director, born in Thames 21 December 1946. She was founding editor of the Sunday Star newspaper (1987–1993) and NZ House & Garden magazine, (1993–94) and the first woman editor of the New Zealand Listener (1994–1997). From 1997 with partner the late Tim Bickerstaff she was a director of direct marketing companies Happy Families Ltd and Intenza NZ. She sold the company in 2015 and is now working as a novelist and podcaster. She published the first four books in a Californian historical mystery series, Of Gold & Blood, in 2018. In October 2018, she was given a Lifetime Achievement Award by ..
● If you want to link to Poisoned Legacy book page, please use the codes provided below! 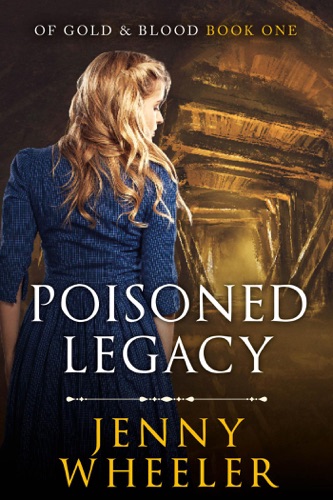