iPhone X represents the future of the smartphone. It’s the biggest leap forward since the original iPhone, and sets the course for the next 10 years of smartphone development.
It’s all screen, and it's beautiful to look at. Like the iPhone 8, it has glass on the front and back, with a stainless steel that wraps around the middle. It’s water and dust resistant, comes in two finishes; space grey and silver. It has an all new display, called the Super Retina Display. Say hello to the future.

Brought to you by the expert team at Tap Guides, and written by best-selling technology author Thomas Anthony, iPhone X Pro Guide is packed with top tips and in-depth tutorials. You'll uncover the history of the iPhone's development from 2007 to 2017, learn about iPhone X features such as Face ID and animated emojis mode, discover how to use iOS 11 and its built-in apps, plus much more. By the time you've finished reading iPhone X Pro Guide you'll be pro in nearly everything iPhone and iOS related.

Inside you'll discover:
The history of the iPhone
The new features of iPhone X
Face ID and 3D Touch
Detailed app tutorials
The secrets of mastering mobile photography
How to edit photos
Essential Settings and configurations
Troubleshooting tips

This is basically a rehash of the Apple event that rolled out the iPhone X, with some historical info thrown in. As an introduction I suppose it’s fine, though there’s little here that you can’t get from watching the Apple Keynote. Probably more frustrating is the detailed content of the book - in a number of places it became clear that this isn’t a focused iPhone X book, but rather one that was written for an earlier model and just had some X content thrown in. In some places, directions are just wrong. One example: it tells you to go into settings to toggle the battery percentage on or off...but that function isn’t available on the iPhone X. In sum, this book is frankly a rehash with few of any unique insights that is priced low enough to encourage impulse purchases while cynically taking advantage of the iPhone roll out. I won’t ask for my $4 back, but I will avoid anything from this author in the future.

I didn’t find enough in here. But, I learned a few things. Unless an author serves up significant amounts of information - and not just rehashed basics..... it’s just an average read. I honestly would have given it two stars, but I considered really new urges o an iPhone, and there, they may get more out of it. It is at least somewhat substantial..... so there was some effort there. Could have use more illustrations as well.....

Didn’t cover every Apple app... didn’t talk about how each are specific to the iPhone X... pretty general information....

The book does actually contain some useful information, however, there are several parts where the author tells you how to do something (supposedly on an iPhone X) but what he says to do isn’t possible. Prime example is that he regularly mentions using the fingerprint scanner which isn’t present on the iPhoneX. If you are looking for a basic introduction to iPhone then sure, read it, most of the information given is relevant to previous versions of iPhone. But if your looking for guidelines on using an iPhone X then don’t bother, ask google instead, you are much more likely to get the correct instructions and it’s free.

Generally helpful but some glaring errors that demonstrate the author does not fully understand the iPhone X. Disappointed. The official Apple iOS 11 guide is free and a far better source of info on the iPhone X.

● If you want to link to iPhone X Pro Guide book page, please use the codes provided below!
L
C 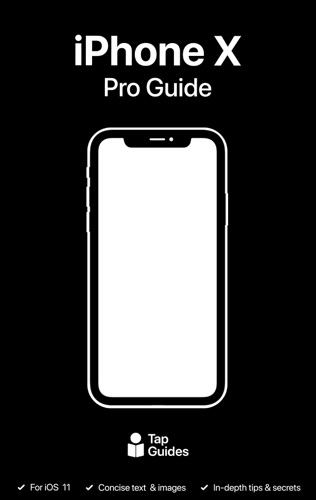