As mounting tensions between China and the United States push the world’s two great powers to the brink of war, it falls to President Jack Ryan to identify the lethal chess master behind the scenes in this thriller in Tom Clancy's #1 New York Times bestselling series.

Jack Ryan is dealing with an aggresive challenge from the Chinese government as the G20 Summit approaches. Pawns are being moved around a global chessboard: an attack on an oil platform in Africa, a terrorist strike on an American destroyer and a storm tossed American spy ship that may fall into Chinese hands. It seems that Premier Zhao is determined to limit Ryan's choices in the upcoming negotiations.

But there are hints that there's even more going on. A routine traffic stop in rural Texas leads to a shocking discovery—a link to a Chinese spy who may have intelligence that lays bare an unexpected revelation. John Clark and the members of the Campus are in close pursuit, but can they get the information in time?

Stayed with it, but took breaks to regain perspective. A very violent, malevolent set of plot lines. Featured a lot of amoral, sadistic bad guys, who needed to be foiled.

Marc Cameron did a good job of continuing the Jack Ryan series in the absence of the great Tom Clancy. The story was original, the characters and settings were plentiful, and the action moved along at a breakneck speed. The only thing I would recommend, in terms of improvement, was that the ending came a little too fast in the final ten pages. That’s not to say that the ending wasn’t satisfying, however. I’m still very much looking forward to Cameron’s next Jack Ryan thriller.

Another good one. These guys are writing just like Tom.

Mediocre at best. Just not the same without Tom....

GenaF - The most boring book I’ve ever read

Took me three months and all my willpower to finish it.

Not the best effort in this series. Two parallel and seemingly unrelated plot lines that somehow managed to come together in a somewhat abrupt fashion in the end.

SmuttyPagerTurnerGuy - Best in the series in a while.

Since 2013 - this is most well written and in a style Tom would have approved of.

Tom Clancy always provided details woven into his stories and I liked it. This book has too many details which I consider as Minutia. Very boring reading at times. Not enough Jack Jr action. Next time a new book comes out I’ll read the first few chapters to see if it is better written before I buy . I have every Tom Clancy Book in every series he had written. However, if his style is compromised again, you’ve lost me as a reader.

Tom Clancy continues to slip as the one-time premier spy thriller author. This is a really, really boring book.

Masters14 - Skipped more pages than ever

I am a huge fan of the Jake Ryan novels, even after the passing of the great Tom Clancy, but I have skipped more pages in this novel due to the trivial blandness of the authors methodical descriptive prose is beyond anything I have ever experienced before. His knowledge of the characters and dialogue are spot on, however, his descriptive sequences are worse than reading about paint drying on a wall. This novel is a great 150 Page read, if you can skip all of the useless drivel than the author throws at you. Tom could draw out sequences of events, but it was an educational waste of description. This is simply a waste of time. The story is good. Characters are good. It could have been told in 1/4 of the pages though. Sorry.

Fun read with twists and turns!

Another cranked out novel, implausible, with a contrived, simplistic finale

this was the worst Clancy ‘franchise’ book yet!! Cameron understands nothing about pace; plot development…..

This is not the kind of subject matter( child slavery) that I like to read in my spy story.

SBonner - One of the best!

Bejjim - Worthy of the Clancy name

This was the first book in a long while that lives up to a Clancy novel. Cliff hangers at the end of chapters and multiple plot lines were very good. Good to see John Clark get a major part.

Good book, good reading. Clancy sometimes gets too detailed about unnecessary stuff, but really good book. Loved the ending and last words of the book.

Just like getting to know Tom Clancy in Red October and Red Storm Rising, multiple story lines make Power and Empire a book that you never want to put down!

ericandi - One the best Clancy books ever

Right up there with the best Clancy books ever. Marc Cameron nailed it.

Not great, so many useless details.

The author does not master the converging stories that made the Clancy style that I always enjoyed. Gets lost in details. I am always thrilled when a new Clancy comes out, but this one failed to interest me.

● If you want to link to Tom Clancy Power and Empire book page, please use the codes provided below!
L
C 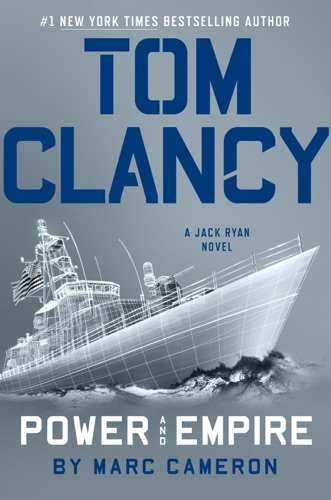