ANCIENT SECRETS ARE SOMETIMES BURIED FOR A REASON

In 1914, Thomas Edison watches as his West Orange laboratory burns to the ground. As he surveys the fire, consuming his life's work, he touches an ancient artifact in his pocket, and smiles.

Sixty years later, an Army SOG team recovers a cache of North Vietnamese intelligence, and discovers among the documents an identical artifact. The find becomes the foundation of a vast and powerful smuggling empire.

Today, someone is after both artifacts, and the secret they may reveal—the existence and location of the fabled lost city of Atlantis.

Dr. Dan Kotler—Archaeologist, Polymath, and occasional FBI Consultant—returns, alongside his partner, Agent Roland Denzel. Together they race to discover the truth behind two artifacts with a long and bloody history.

Can they solve the Atlantis Riddle, and recover a trove of Edison's lost treasures, before it all falls into the wrong hands?

THE SECOND BOOK OF THE DAN KOTLER ARCHAEOLOGICAL THRILLERS

Very different and interesting read. Not exceptional but intriguing concept and primary characters.

A well thought out, page turner that keeps you entertained and enthralled.

adpantano - Fast Paced and intriguing characters including an historical person.

Loved the characters and the fast pace the story that unfolded. An out of this world plot yet very feasible. A very fun read.

Great follow up to The Coelho Medallion. This thriller series is a well developed Kotler storyline. Hard to put down once you start reading.

Fully enjoyed, hard to put down, even tough I’d figured out bad guy. Opened up a different type of read for me

I have read many Clive Cussler novels. This is close to comparable.

Kevin Tumlinson wiki coming soon...
● If you want to link to The Atlantis Riddle book page, please use the codes provided below! 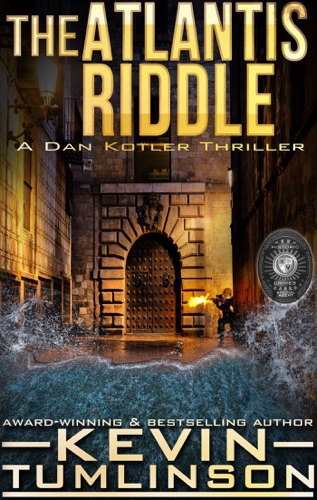