Lucas Monroe dropped out of college only to become a multi-billionaire and tech world God.  He can have any woman he desires in his bed, but forever isn’t in his plan. Until he meets the one female who makes him rethink his views. This bad boy is going down fast … and loving every minute.

Carly Phillips really knows how to write a wonderful, yet exciting love story. The main characters were so real and endearing that you were hoping against hope they would be at peace together. A fun read!!!!

I enjoyed this. Highly recommended.

Lucas and his brother are practically enemies. Maxie is Lucas’ childhood lifelong friend. So how does she not know of what Lucas suffered at the hands of his brother? Anyways she is married to his brother and pregnant. When everything goes wrong she turns to Lucas. Was a good book but was annoyed with Maxie’s character at times.

Hot, sexy, sweet, emotional, friends from childhood second chance romance with a hint of danger. Including a competitive sibling that is beyond redemption. Lucas Monroe is charming, wicked smart and off the charts hot. The kind of man who can have any woman he wants except the only one he has ever loved. Maxie is sweet and giving but trapped in a horrible marriage to his brother. The emotional twists and turns in this journey are captivating and keep you reading hopeful for a happy ending. Love this series!

4 1/2 STARS! Another sexy billionaire takes us for a ride in the latest Billionaire Bad Boys release by Carly Phillips! I loved Lucas, and other than wanting to kick Maxie a few times when I felt like she wasn’t appreciating him enough, I enjoyed her too. Lots of steamy romance, and a bit of intrigue as we try to figure out what’s going to happen with the trouble that is following her around! Though they were childhood best friends and each secretly wanted more with the other, Lucas Monroe and Maxie Sullivan went separate routes through life. When hard times left her needing him, he was always there for her, willing to pick up the pieces. This time is more complicated than ever, and requires lots of close quarters. Will they finally decide to put down the armor and take a chance on each other?

I know I'm in for a treat when this author writes a new book and I am NEVER disappointed. This story is about Lucas Monroe and Maxie Sullivan. It's a fabulous friends to lovers story with major complications in between. By "major complications" I mean Lucas' brother Keith. Lucas is the childhood nerd who became the sexy Alpha man to the extreme. Maxi is one lucky woman to have a friend and more in Lucas. The steam factor is off the charts FLAMING HOT!!! I can't wait for the next book in the Billionaire Bad Boys series. Received a copy via RockStarLit in exchange for an honest review. I was not compensated for my review. I was not required to write a positive review. The opinion expressed is my own.

Having read the first book of this series, I was eager to move onto book 2. This series is about a group of best friends that formed a social media app, Blink. Lucas has only loved one woman his entire life. Being the geek of the family, his brother, did everything to ruin his brother's life, including marrying his only love. Throughout the book, his brother's death, still disrupted his & Maxie's life. This was a very intriguing story, with many twists & turns. Love Carly's books! 5 Stars definitely! Can't wait to read Derek's story!

Going Down Fast is the second book in Carly Phillips newest series, the Billionaire Bad Boys. Lucas was a nerd growing up. He was bored in school and bullied by other kids, especially his older brother Keith. He ended up dropping out of college only to become a multi-billion in the tech world. Keith was the popular kid, into playing sports, and besting everyone else, including his Lucas. Keith even manipulated the girl Lucas cared for by lying to her, telling her Lucas was engaged, and getting her to marry him. Maxie Sullivan cannot believe all the lies her husband, Keith, told before he died. He was unfaithful, gambled, embezzled money from his law firm, stopped paying the life insurance policy, and took out a second mortgage without telling her any of this. It is only after his death that sure learns of all of this. Icing on the cake is losing her job at his law firm because of his sins. Lucas has been her best friend since they were kids. Maxie always thought Lucas was her future and regrets marrying the wrong brother. Lucas offered Maxie a place to live until she is able to support herself. He has never stopped loving Maxie and struggled with the way his brother treated her. Now these two have a chance to rewrite their future. This book is definitely hot and sexy with loveable characters that you want to support and cheer on hoping for that happy ending. The characters were well written, authentic and complex. The story line was riveting and kept my attention to the very end. I genuinely enjoyed reading this book and had trouble putting this book down. I highly recommend this book to other readers.

Well, the second book in Carly Phillip's Billionaire Bad Boys did NOT disappoint! I want to be honest for a minute. When I read the prologue, I got nervous. I don't typically read books about the girl wanting the other brother. I can't ever wrap my head around how those will work. But, I kept on reading and I quickly realized that this was a book I could EASILY get lost in. It was so great. I fell so hard for Lucas. He rocked my socks. His love for Maxie is so all consuming that it couldn't be ignored, no matter how hard they tried. Maxie was just awesome! Life had dealt her an extremely unfair hand but she made the most of it.....and got the right brother in the end! Great, fast paced, sexy, funny story!!! Happy reading!

Mslizalou - Pulled me in from first page!!!

Going Down Fast is the second book in the Billionaire Bad Boys series from Carly Phillips. I loved the first book in the series, but have to say that Going Down Fast was even better than Going Down Easy. I feel like I'm about to wax poetically about this book, when what I really want to say is just, buy this book, trust me you will thank me later. I'll be honest; Going Down Fast does not start out with sunshine and rainbows. Maxie is actually married to Keith, who is Lucas's older brother, and pregnant when the book opens. Keith is everything his brother isn't and Maxie as usual has to depend on Lucas when she needs help as she miscarries her baby late in the pregnancy. Ms. Phillips has shown she isn't afraid to deal with tough subjects, and she handled Maxie losing the baby with respect and showed how the loss can affect the person longterm. I won't say I was sad to find out Keith had died. As I said before he was the exact opposite of his brother Lucas and it only became more apparent the more time passed. I will say for everything he did wrong to Maxie and Lucas, at least his mistakes pushed Maxie and Lucas together following his death. I absolutely love the friends to lovers trope, so when I found out Maxie and Lucas had been friends since they were kids, I knew this book would be a favorite. I have to say that Maxie is one of the strongest heroines ever. She has been put through hell and is even stronger now. I loved that while she had to depend on Lucas for a home after Keith died, she still plans to stand on her own two feet and support herself as quickly as possible. She is still suffering from losing her baby, and while it broke my heart, I was so glad it was part of the story as it was so true to life. Lucas was your typical high school computer nerd in high school. He was always in his more athletic brother's shadow in school at even at home. He now had a successful company with his best friends and has bulked up since he left high school. Lucas is everything his brother never was, a man of moral integrity who struggles with the fact that he has always been in love with his best friend. The attraction between Lucas and Maxie was obvious from the very first time we saw them on the page together. I loved they both had been attracted to each other since they were teenagers. I loved the chemistry between them. They were comfortable enough as friends to still have the sweetness to their chemistry, but also had some pretty smoking hot sex and couldn't keep their hands off each other. The fact that Keith's death and his actions before his death continued to cause Lucas and Maxie problems made me angry, especially as more and more about Keith was revealed. I did love working together to figure out everything only brought Lucas and Maxie closer, but hated they had that shadow over their new relationship. However, I really do feel they only grew closer because of all they went through. Going Down Fast pulled me in from the first page and I literally couldn't put this book down until I finished reading it. I highly recommend Going Down Fast to all contemporary romance readers and can't wait to read more books in the Billionaire Bad Boys series. Rating: 5 Stars (A+) Review copy provided by publisher

This is the second book in this series and is absolutely fabulous. Lucas and Maxie are perfect together. This is a friends to lovers story and you are always cheering for them but with so many twists and turns and so many people that it looks like are against Lucas and Maxie can they really end up together. Carly Phillips masterfully ties in many characters from other books but you haven't had to have read them to understand. Carly Phillips keeps you wanting more in this book and I can't wait for the next installment.

● If you want to link to Going Down Fast book page, please use the codes provided below!
L
C 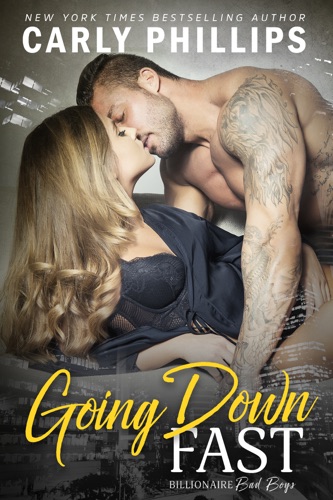